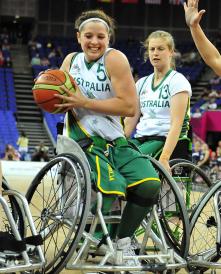 Among the five teams the Gliders will face in Pool A are London Paralympic bronze medallists, The Netherlands, fellow Europeans France, 2010 World Champions USA, Peru and Mexico.

The silver medallists at the London 2012 Paralympic Games, the Gliders qualified for June’s World Championships as the top team in the region after claiming the 2013 IWBF Asia-Oceania Zone Championships.

Australian Gliders Head Coach Tom Kyle said he is excited by the challenge ahead, believing the quality in their pool will have the team battle-hardened for the knockout stages of the tournament.

“I’m very happy with how our draw has eventuated,” Kyle said.

“The Netherlands and the USA present the greatest challenges for us, but I wouldn’t discount the likes of France, Peru and Mexico.

“When you come to a World Championship all teams are going to be competitive, but looking at the draw I think we’ve done well as Pool B appears to have slightly more depth.”

The Gliders have a long and successful history in the IWBF Women’s World Wheelchair Basketball Championships, competing at every tournament since its inception in 1990 – reaching the semi-final stage in each of the past five tournaments.

The 2014 IWBF Women’s World Wheelchair Basketball Championships will take place in Toronto, Canada from 20-28 June. The full fixture for the competition is expected to be announced in the coming months.