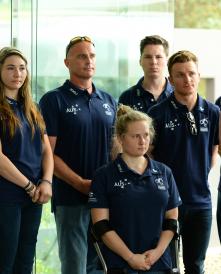 Australia will send six alpine skiers, two sighted guides and for the first time, three snowboarders to the Russian city, with veteran Cameron Rahles-Rahbula set to compete at his fourth and final Games.

The 30-year-old was Australia’s best performed athlete in Vancouver 2010 with two bronze medals in the slalom and super-combined, and retired from the sport in mid-2013 only to return months later for one final tilt at a winter Paralympic medal.

Rahles-Rahbula will be joined by two-time Paralympian and Torino bronze medallist Toby Kane and Vancouver Paralympian and current world number two in the giant slalom, Mitchell Gourley in the men’s standing class.

Vancouver bronze medallist and vision impaired athlete Jessica Gallagher made her return to ski racing in September 2013 with new guide Christian Geiger, after competing in athletics at the London 2012 Paralympic Games. As the first Australian female to compete at both the summer and winter Paralympic Games, Gallagher has again been selected to the Team and heads into Sochi in formidable condition, as does teammate and rival Melissa Perrine and her guide Andrew Bor, with both pairs winning a number of IPC World Cup gold medals this season.

“I’d like to congratulate all athletes on their selection to the 2014 Australian Paralympic Winter Team,” said APC President, Mr Glenn Tasker.

“Whether it’s your first Games or your second, third or fourth, it is always a great honour to represent your country and I look forward to watching the team’s performances and sharing them with the rest of Australia during the Games,” he said.

2014 Australian Paralympic Winter Team Chef de Mission, Chris Nunn, says the Team as a whole is reaching its peak at the right time, as they continue to compete on the European leg of the IPC World Cup season after a successful North American leg.

“We have a very strong group of experienced, talented alpine skiers,” said Nunn.

“All of them except for Victoria have been to a Paralympic Games before, all of them have won medals over the last two World Cup seasons and all of them are medal contenders in Sochi.”

“It might be a bit soon to expect medals from our three snowboarders given how new the sport is to the Paralympic Winter Games, but that said, they won’t be in Sochi just to make up the numbers either,” said Nunn.

“Trent has a lifetime of snowboarding behind him before acquiring his disability, young Ben has grown up on the snow and Joany has a strong athletics background which is translating well across to winter sport.”

The APC hopes the Team will improve on its performance from the Vancouver 2010 Games, where the Team won a silver and three bronze medals to finish 16th on the medal tally.

It will cost the APC $1.4 million to send the Team to Sochi, with $200,000 of the budget still outstanding. As a charity, the APC relies on donations from the Australian public to send Paralympic Teams to the summer and winter Games and two weeks ago launched the Believe campaign to raise the remaining funds. Members of the public can pledge their belief in the Australian Paralympic Team by donating at pledgeyourbelief.org.au