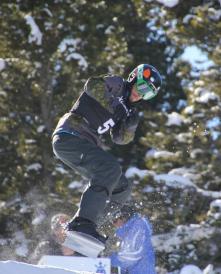 The Australian Paralympic movement continues to mourn after the death of Para-snowboarder Matthew Robinson on Friday.

Australian Paralympic Committee President Glenn Tasker said: “We have been absolutely devastated by Matthew’s tragic passing. Our thoughts and deepest sympathies are with Matthew’s loved ones at this terrible time.

“We have been doing everything we can to best support Matthew’s fiancée, family and team mates to this point, and we will continue to do so during the difficult period ahead.

“The loss of Matthew has obviously hit so many people extremely hard.

“Matthew represented Australia with such great pride and distinction in snowboarding and recently won the IPC World Cup – Australia’s first for the sport. He had immense talent and enthusiasm for his sport, his team mates and for representing his country. For our Paralympic family and for Australian sport to lose such a wonderful individual, is very upsetting.”

Matthew passed away in Kuwait City, where the Air Ambulance he was travelling in en route to Australia had landed for a scheduled refuelling stop. He suffered a cardiac arrest on board the aircraft and CPR was administered by the Air Ambulance medical crew. Sadly, he could not be revived.

Matthew was being transported to Melbourne by Air Ambulance from Barcelona, where he had been receiving treatment for neck and spinal injuries he suffered in a serious race crash at the IPC World Cup finals in La Molina on February 12.

After spending eight days in hospital, he was cleared by medical staff in Barcelona to undertake the journey on board the Air Ambulance which departed on Thursday evening (AEDST). He was due to arrive in Melbourne on Saturday morning (AEDST).

Matthew’s fiancée, who accompanied Matthew on board the Air Ambulance, remains in Kuwait City. She has received support from Australian medical staff who arrived in Kuwait on Friday, and she is also receiving consular assistance from the Department of Foreign Affairs and Trade.

Matthew’s parents, who travelled to Barcelona to visit their son in hospital, arrived home in Australia on Friday. They were advised of their son’s death upon their arrival by Matthew’s brother and sister.

Arrangements for Matthew to be repatriated to Australia continue to progress, while tributes to the 28-year-old and messages of condolences to his family have been flowing.

Sir Philip Craven, IPC President, said: “The whole of the Paralympic Movement is deeply saddened by this heart breaking tragedy. Our thoughts and deepest sympathies are with Matthew’s fiancée, family, friends and teammates at this difficult time.

“Matthew was a world class and extremely popular athlete, a fact underlined by the vast number of support messages he received from around the world following last week’s accident. He sustained his injuries doing the sport he loved most.

“The IPC and whole of the Paralympic Movement are in deep mourning at his passing. The Movement is a close knit family and he will be sadly missed by all.”

The APC again asks that all media respect the privacy that has been requested by Matthew’s family and friends.

FEB 21: The Australian Paralympic Committee is deeply saddened by the tragic passing of Para-snowboarder Matthew Robinson.

Our thoughts and prayers are with Matthew’s parents, his fiancée, his family and his teammates. Our immediate concern is to do everything possible to support them at this extremely sad and difficult time.

Matthew suffered neck and spinal injuries in a serious race accident last Wednesday (12 February) while competing at the IPC World Cup finals in La Molina, Spain.  After spending eight days in hospital in Barcelona, he was stabilised before being cleared by medical staff to be transported on board a specialised Air Ambulance to Melbourne. During a scheduled refuelling stop in Kuwait, Matthew suffered a cardiac arrest on board the aircraft and CPR was administered by the Air Ambulance medical crew. Sadly, he could not be revived.

The Australian Paralympic Committee will not make any further comment until we have been advised of the wishes of Matthew’s fiancée and parents.

We ask that all media respect the privacy of Matthew’s family and friends at this time.