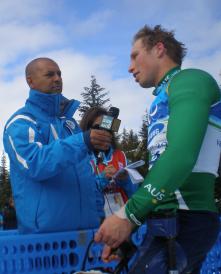 It will be the third consecutive Paralympic Winter Games covered by the ABC with the agreement this time extending beyond the television broadcast to include the growing online environment.

Under the agreement, ABC TV will broadcast the Opening Ceremony live on 8 March (from 3am AEDST) as well as a half hour daily highlights package at 10:30am on ABC1, and nightly repeats at 6pm, also on ABC1.

The ABC will also live stream all alpine skiing events, as well as selected cross-country and biathlon events and the popular ice sledge hockey on ABC Grandstand’s website www.abc.net.au/grandstand, and make all daily highlights packages available to watch on iView.

“We are pleased to again have the ABC as our broadcast partner as we work to bring the Paralympic Winter Games to all Australians,” said APC President, Glenn Tasker.

“Much like the winter Olympics, the Paralympic Winter Games appeal to the athlete and daredevil in all of us and we look forward to Australians tuning in to continue their interest in Sochi and of course, support our Paralympic Team,” he said.

“The ABC has a deep connection with the Paralympic movement, having covered a number of Paralympics now including the very successful coverage of the London 2012 Games.

“We are very excited by what the ABC is offering in terms of their Sochi coverage, and we are confident the ABC team in Russia will deliver an outstanding product to give Australians watching at home a great viewer experience.”

The ABC’s broadcast will be presented by Amanda Shalala and Darren Boyd as well as special guests from the Australian Paralympic movement.

Australia will send a team of nine athletes and two sighted guides to Sochi, including three snowboarders to contest the first Para-snowboarding event on the Paralympic program.

“We’re excited to again have Amanda and Darren bring the Paralympic Games to Australians. We saw them on the London 2012 coverage, they have a strong affiliation with the Paralympic Games and together with members of our team and our movement, will bring great expertise and commentary for the viewers back in Australia,” said APC Chief Executive, Jason Hellwig.

“A key strategic goal for the APC is to increase media coverage of the Paralympic Games and Australia’s Paralympians over the next four years and we are pleased to again be working with the ABC to share the performances of our winter Team with everyone at home.”