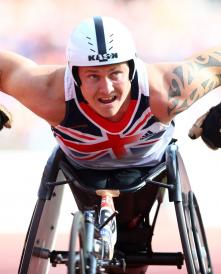 Fearnley led the lead pack into the final corner of the course at Circular Quay, but couldn’t hold on when Weir found something in reserve in the final 100 metres to seal a satisfying victory.

Weir, a four-time gold medallist at the London 2012 Paralympic Games, had finished second in his two previous Oz Day 10k races and said while he felt for Fearnley, he was relieved to win the iconic Australian Day wheelchair race for the first time.

“I do feel a bit bad for Kurt, but it’s racing. You just want to beat the people in front of you and that is what I did today,” Weir said.

“I’m really chuffed. This is one of the most iconic wheelchair races around the world. I’ve come second here twice and I was really hoping this year would be my year.”

Though visibly disappointed, Fearnley was typically magnanimous when asked to describe the feeling of losing his favourite race on the wheelchair racing calendar for the first time in a decade.

“It is hard to take, but what do you do? You get back up and you have another crack,” Fearnley said.

Fearnley said he knew Weir was on his rear wheel and in a great position to strike, but felt as though he was strong enough to resist any challenge.

“I knew he had a game plan to hold on to my back wheel, but I was hoping I had done enough for him to have disappeared,” Fearnley said.

“I was just gritting my teeth and hoping that I was hurting him more than I was hurting and that I’d be able to get away. But that just wasn’t the case. It’s a weird feeling”