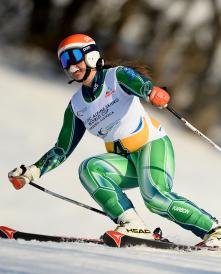 Currently ranked number six in the world in vision impaired downhill racing, Perrine clocked 45.71 seconds in her first run and then 1:06.21 in the second to finish a close 1.2 seconds in front of world number three Kelly Gallagher of Great Britain and world number four Danielle Umstead of the United States of America.

The win has secured Perrine’s qualification for each alpine skiing event at the Sochi 2014 Paralympic Winter Games, which begin 7 March, 2014.

From the New South Wales southern highlands town of Welby, Perrine has been skiing with the Australian squad since 2009 with sighted guide Andrew Bor and made her Paralympic Games debut in Vancouver 2010, where her best result was a fifth place in the downhill.

Now four years later, Perrine has won three bronze medals in the downhill and slalom during the 2012-13 World Cup season, and is tracking well for success just over six weeks out from Sochi.

Australian Winter Head Coach Steve Graham says Perrine’s win is the first IPC World Cup gold medal for an Australian female alpine skier and is testament to the increased training from the 25-year-old.

“It was an impressive run after two solid training runs over the last two days,” said Graham.

“The good news is that Mel and Andy have more in reserve and this result goes well for Mel’s goal for this season to be the best female vision impaired skier across all disciplines.”

Australia’s Mitchell Gourley and Toby Kane finished out of the medal placings in their downhill speed races in the extremely competitive men’s standing class event.

Gourley, who has been Australia’s most successful athlete during the 2012-13 World Cup season, is currently ranked ninth in the downhill and finished in eighth place, 3.69 seconds behind the winner Markus Salcher of Austria. Kane, who is ranked 11th, finished in 13th place, 4.76 seconds behind Salcher. The results indicate the strength of the field both athletes will face in Sochi.

“It was a very hotly contested field and the snow fall during the race hampered the boys somewhat. We’re expecting better from both for the remainder of the season,” said Graham.

The Australian Paralympic winter squad, including vision impaired skier Jessica Gallagher and her guide Christian Geiger, and sit-skier Victoria Pendergast will next compete at the next IPC World Cup at Copper Mountain, USA this Friday 17 January. Australian Para-snowboarders Trent Milton, Joany Badenhorst and 14-year-old Ben Tudhope will continue to train ahead of their next competition at the European Cup and IPC World Cup in St Moritz in February.

Perrine was unable to back up her downhill gold with a second downhill medal, falling six gates from the finish after a stellar first run down the mountain. Although uninjured in the fall, the DNF prevented her from competing in the slalom section of the super combined, which according to Head Coach Steve Graham, the 25-year-old was extremely disappointed about.

“She knew she was having a fast run which was confirmed by the official timing splits,” said Graham.

“But while she fell today, everyone is excited about what is ahead. We know she is fast and now it is about being smart and consistent.”

The men’s standing athletes improved on day one’s results, with Mitchell Gourley posting a fifth place finish in the downhill, while Toby Kane continued to struggle in the middle of the course to finish again in 13th position. Kane enjoyed a better slalom leg of the super combined event, posting the seventh fastest time to finish 10th overall while Gourley had a much slower run to push his final overall placing back to ninth.