Perrine backs up with bronze 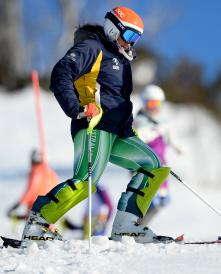 Fresh off the back of her gold medal win at the weekend, Australian alpine skier Melissa Perrine has again found herself on the IPC World Cup medal podium, this time with a bronze.

The 25-year-old vision impaired skier and her sighted guide Andrew Bor won bronze in the giant slalom at the IPC Alpine Skiing World Cup in Panorama, Canada, finishing the day’s racing with a combined time of 2:21.51 – just over eight seconds behind winner Kelly Gallagher of Great Britain, and almost 3.5 seconds behind silver medallist Alexandra Frantseva of Russia.

After a horror first run in the giant slalom which saw Bor almost crash at the second gate, all seemed lost for the pair. But they managed to regain their rhythm towards the end of the run, and then recorded the second fastest time in the second run to nab a place on the medal podium.

“Mel is skiing as fast as she has been since the beginning of the season and tomorrow’s super G should give her a good chance to reach higher on the podium.”

There was no medal success for Australia in the men’s standing class, with Mitchell Gourley and Toby Kane recording top 10 finishes but again missing out on medals.

The two Australians were almost inseparable in the first run, finishing just 0.52 of a second apart in seventh (Kane) and eighth (Gourley) place, with Kane a mere 1.86 seconds behind world number one, Matthias Lanzinger of Austria. The Aussie duo’s second runs saw Gourley placed seventh overall and Kane ninth.

Coach Steve Graham says the team is now hoping for clear weather overnight and good snow for tomorrow’s final day of competition in the super G, where all three athletes are strong medal contenders.