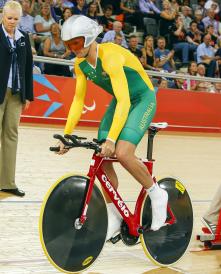 Cycling Australia is pleased to announce the Australian Para-cycling Track Team for the UCI Para-cycling World Track Championships to be held in Aguascalientes, Mexico, 10 – 13 April 2014.

The new pairing claimed two gold medals at the recent National Championships in Melbourne and will be looking for a solid performance in Mexico ahead of the Glasgow 2014 Commonwealth Games.

“We are obviously really pleased that the Para-Cycling World Championships have been announced for Mexico,” said Para-Cycling Performance Director and Head Coach Peter Day.

“We are really excited about this team as it is composed of a strong mix of proven Para-cyclists who have performed on the international stage including the World Championships and the Paralympic Games, in addition to a couple of new exciting, long term prospects.”

The team will be assembling for a pre-departure camp in Adelaide from March 24 and will depart for Mexico on April 4.