Help send our Paralympians to the Games 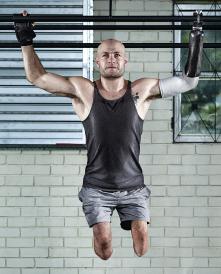 Launched today, the ‘Believe’ campaign has been developed to raise the vital funds required by the APC to send Australia’s Paralympic athletes to future Games. As a charity, the APC sees the Believe campaign as a vital part of its fundraising efforts in 2014 and onwards.

The initiative gives the public the opportunity to pledge their belief in an individual athlete or team. The six athletes fronting the ’Believe’ campaign include;

All donations will go towards helping the APC’s talented pool of athletes reach their full potential and achieve success at the Paralympic Games.

“Believe it or not, more than half the Australian population doesn’t realise the APC is a charity that needs to fundraise to send the Team to each Paralympic Games,” said Jason Hellwig, CEO of the APC.

“Whilst results are important, making sure that athletes get the chance to compete in the first place is essential. That’s why the Believe campaign is so important as we head towards the Paralympic Winter Games in Sochi in March and on to Rio in 2016. Every cent counts and we’re urging the public to dig deep and give generously.”

Alpine skier and Sochi 2014 Paralympic competitor Victoria Pendergast believes that without the support of the public, she wouldn’t have had the opportunity to live her dream.

“Alpine skiing has taken me to amazing places, made me a stronger person and provided me with a passion I love. Without the public’s donations to the APC, my skiing career wouldn’t have been possible. I’m extremely appreciative of the belief that people put in me every day and I will be putting my all into representing my country and doing Australia proud at Sochi.”

“There’s no doubt we’re aiming high but we’re no strangers to determination and sheer hard work. We have every confidence that our athletes can go all the way and we promise to do our all to get them there – but we need Australia’s help,” said Hellwig.

“While the APC is grateful for the government funding it receives, it does not stretch far enough to funding the delivery of the Teams to the Games. In fact, over a third typically comes from public donations, which is why the campaign is such a vital part of the APC’s success,” said Hellwig.

The Believe campaign website includes the inspirational stories of all the athletes and teams involved in the campaign and an online donation form where members of the public can pledge their belief by choosing to make a one-off or regular contribution.

It is expected that over time, the campaign will be extended to include additional athletes.

Pledge your belief in the Australian Paralympic Team now – pledgeyourbelief.org.au