Goerlach overcomes fears to stay in race for Rio 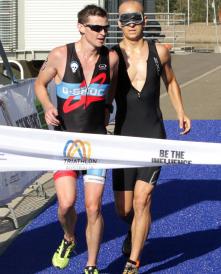 If Jonathon Goerlach can stay in the race then he will be in the position to win it – that’s the aim of the talented Vision Impaired triathlete who has his sights set on representing Australia at the 2016 Paralympics in Rio.

The 31-year-old from the NSW South Coast has a simple motto he uses every day: “Swim to stay in it; bike to be in it and run to win it”

Not as easy as it sounds for a man who continues to work on his fear of the water after a near-drowning experience at the age of four.

And couple that with his disability – blindness and lack of hearing caused by the rare genetic disorder Ushers Syndrome and Jonathon Goerlach is a man overcoming the odds to achieve his dreams.

Although unable to see the finish line at today’s Australian and Oceania Paratriathlon Championships at the Regatta Centre, Penrith, Goerlach and his guide, fellow Canberra-based triathlete Daudi Somi, received heroes welcomes when they reached the arch.

He could barely hear the commentator calling his name and his family and friends shouting their encouragement, but the smile on his face said it all.

It was far away the most impressive performance of his career, which has already taken him to the ITU World Triathlon Championships in Auckland in 2012.

He was the second athlete across the finish line on a perfect morning at the Regatta Centre in Penrith.

For Goerlach and Chaffey, they are well and truly on their way to achieving their dreams of wearing the green and gold in Brazil in two years time.

Chaffey has been the face of Australian Paratriathlon since winning his first World title in 2009 and if Goerlach gets his way then he will be joining the talented Chaffey as our Paratriathletes work towards Rio.

Although for Goerlach, conquering his fear of the water and mastering the 750m swim before he embarks on the 20km bike and five kilometre run, will be his major focus.

At the age of four he had a near-drowning experience in his dad’s backyard and for the next 25-years he didn’t go anywhere near the water.

“I really only started swimming two years ago because of my fear of the water so it’s an area that I have to work on with some one-on-one coaching,” said Goerlach, who will re-locate from the NSW South Coast to Canberra to attend University and train for his tilt at the Paralympics.

Goerlach signifies the vast improvement and competitive spirit instilled in Australia’s Paratriathletes – once again led by Chaffey, who admitted he didn’t feel comfortable through the 750m swim, but still produced the fastest time ever recorded for a Tri1 athlete after putting together awesome bike and run legs.

“Although the swim wasn’t great the rest felt really good and any time under the hour you have to be happy with,” said Chaffey.

“It is hard to compare times on different courses and weather conditions even on the same courses but I will take a time under 60 minutes any day.”

Paratriathlon is a sport very much on the move around the world and Triathlon Australia is quickly becoming a world leader in the countdown to the sport’s Paralympic debut at the 2016 Games in Brazil.

Today’s fields increased from 18 starters in 2013 to 33 this year and Triathlon Australia is confident that it is only just the start of a major boom in Paratriathlon.