Australians knocked out of Oz Open 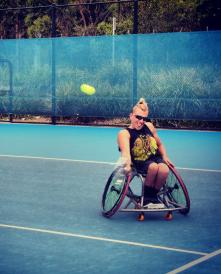 Wheelchair basketballer Dylan Alcott’s spectacular return to wheelchair tennis has come to an end, with the 23-year-old finishing third in his pool at the Australian Open in Melbourne.

Before an impressive crowd at the wheelchair tennis at Melbourne Park, Alcott won one of his three pool games against Great Britain’s Andy Lapthorne but it wasn’t enough for him to play the final in the quad division.

Having fostered a successful junior career in the sport before joining the Australian men’s wheelchair basketball team for their Beijing and London Paralympic campaigns, Alcott returned to the tennis court this summer for the ITF Wheelchair Tennis Super Series and was able to hold his own against the top ranked players in the world.

Meanwhile, in the singles competition, Australia’s Adam Kellerman was knocked out in the quarterfinals by Dutchman Maikel Scheffers in straight sets, 7-5, 7-5.

Japan’s Shingo Kuneida took out the men’s singles trophy for the seventh time since 2007.