“I got into archery as something to keep me busy and get me motivated rather than sitting inside. Now I’m on my way to breaking world records in Tokyo!” 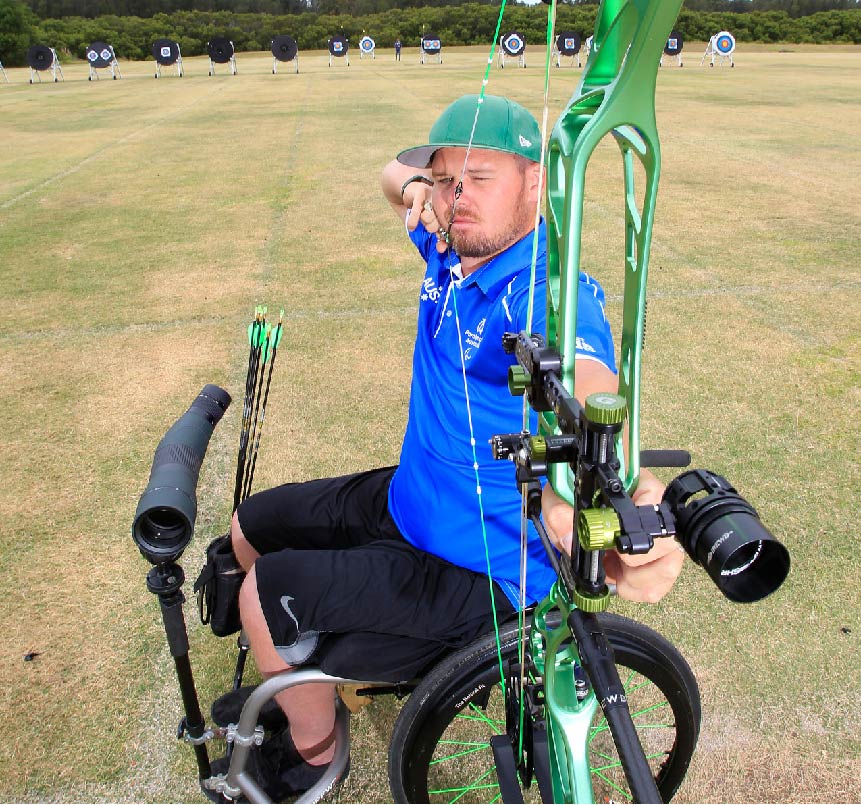 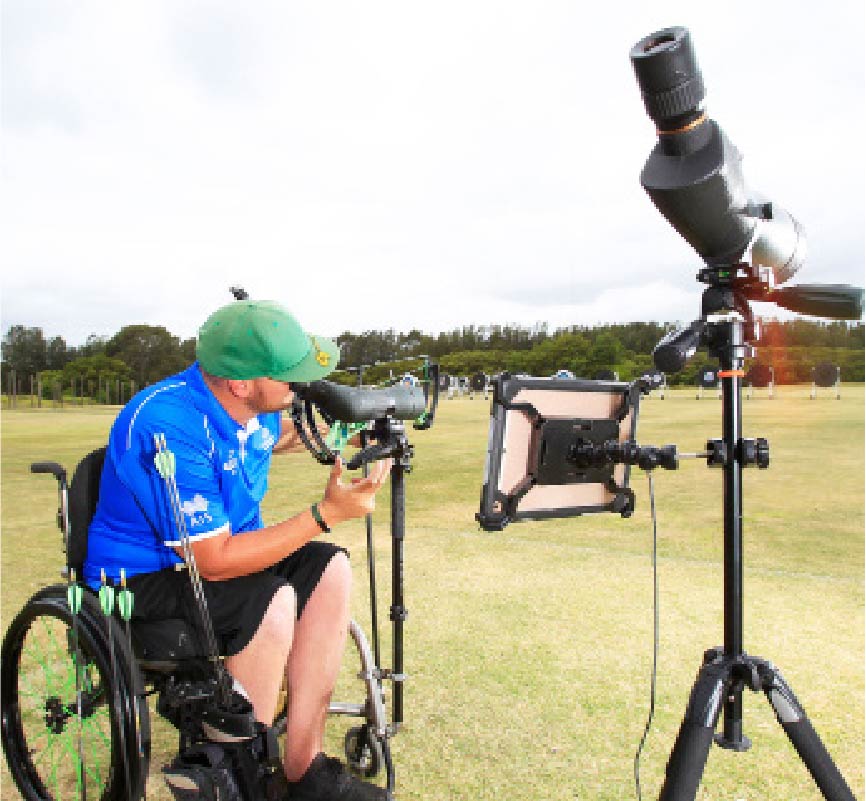 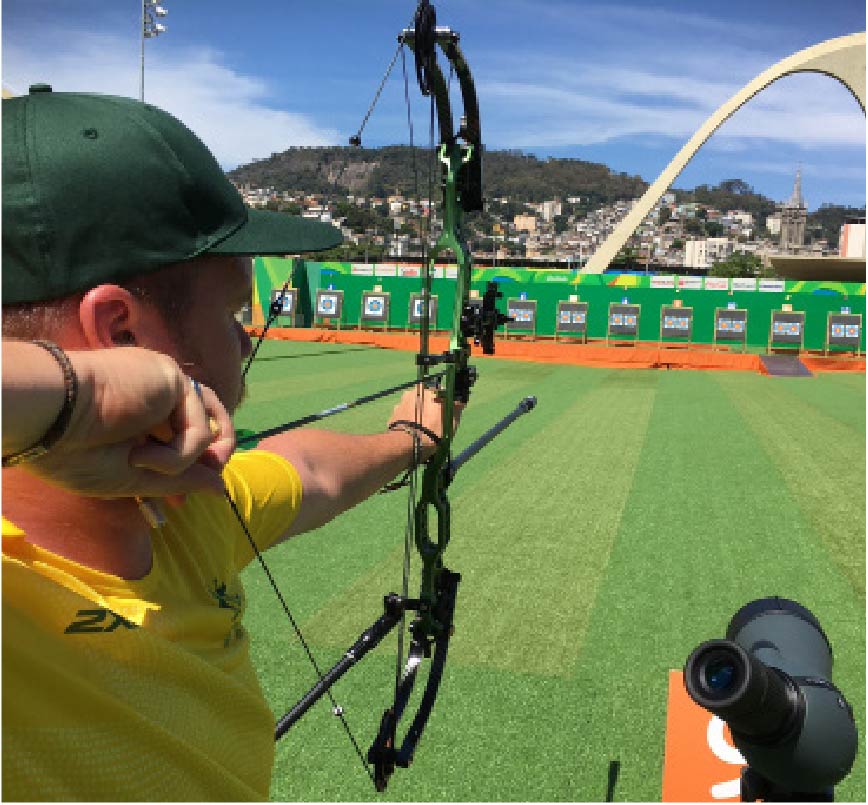 “With just 200 days to go until the
Tokyo 2020 Paralympic Games,
almost 600 athletes across
Australia are working harder than
ever to try and make the team.”

They are focussed, tenacious and determined to make us proud. Allow us to introduce one of these inspiring athletes, Jonathan Milne.

Jono knows a thing or two about focus and determination. They’re his superpowers! And they’ve lifted him from the depths of despair to the elite level of world archery.

We all know someone like Jono. He is your classic outdoorsy, sporty bloke. From football to mountain biking and a dozen sports in-between, he was into everything. Then at the age of 26, a bodysurfing accident left him paralysed.

Now, through sheer focus and determination, he’s just nine months away from a chance of achieving gold in the next Paralympics.

Jono picked up archery as a way of coping with his life-changing injury. He started out at his local club and found himself reaching world championship scores. He self-funded a trip to the World Championships in Germany in 2015 and came fourth in the world. That put him on the radar of Paralympics Australia. 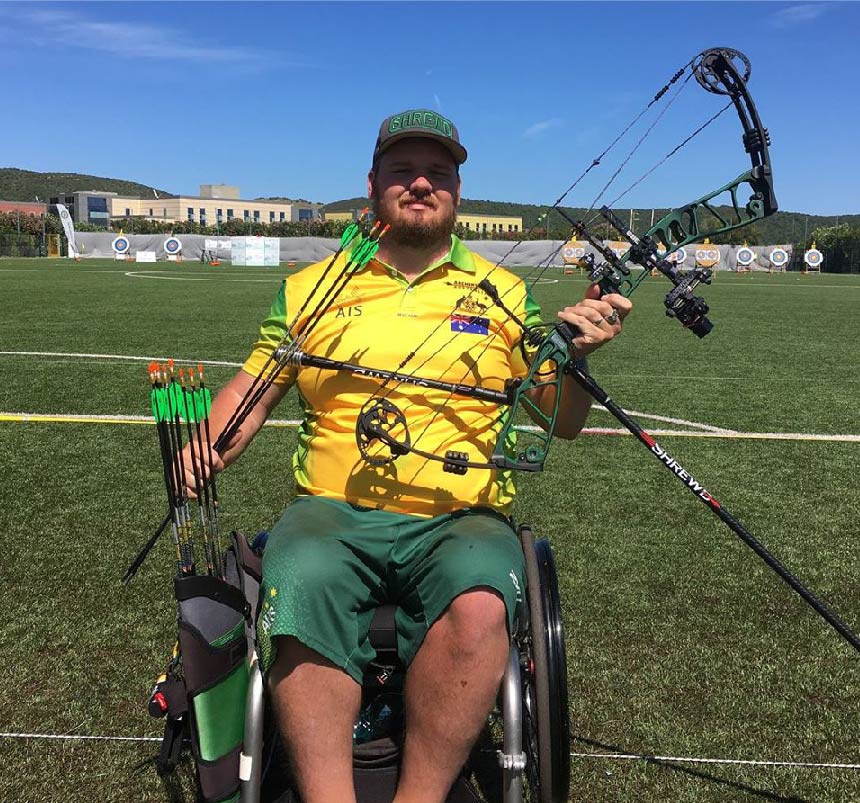 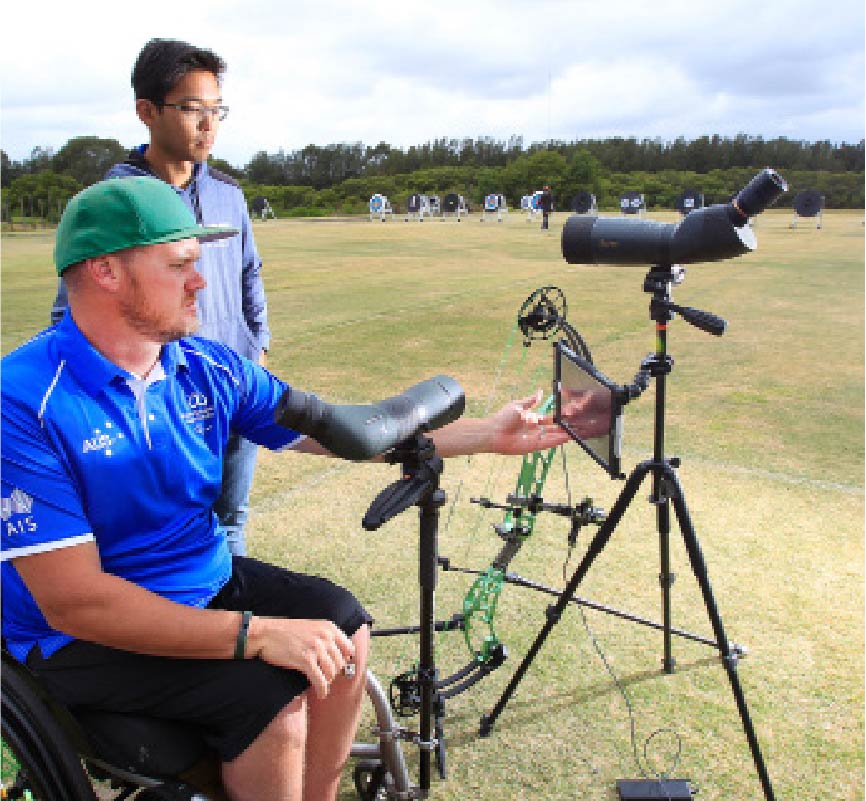 That’s where you come into the story. Thanks to kind supporters like you, Jono was able to fund expert coaching and better equipment. With this boost, Jono went on to grab Australia’s first Para-archery medal in 32 years at the 2016 Rio Paralympic Games.

And he’s got a real chance at winning a historic gold medal at the Paralympic Games in Tokyo next year. But he can’t do it without your help. Jono and other athletes urgently need better technology, equipment and training to be able to reach their true potential in Tokyo.

We might have an answer to this problem. It’s something we have developed. A secret weapon that will help Jono and others, but we need your support to ensure we can use it further. 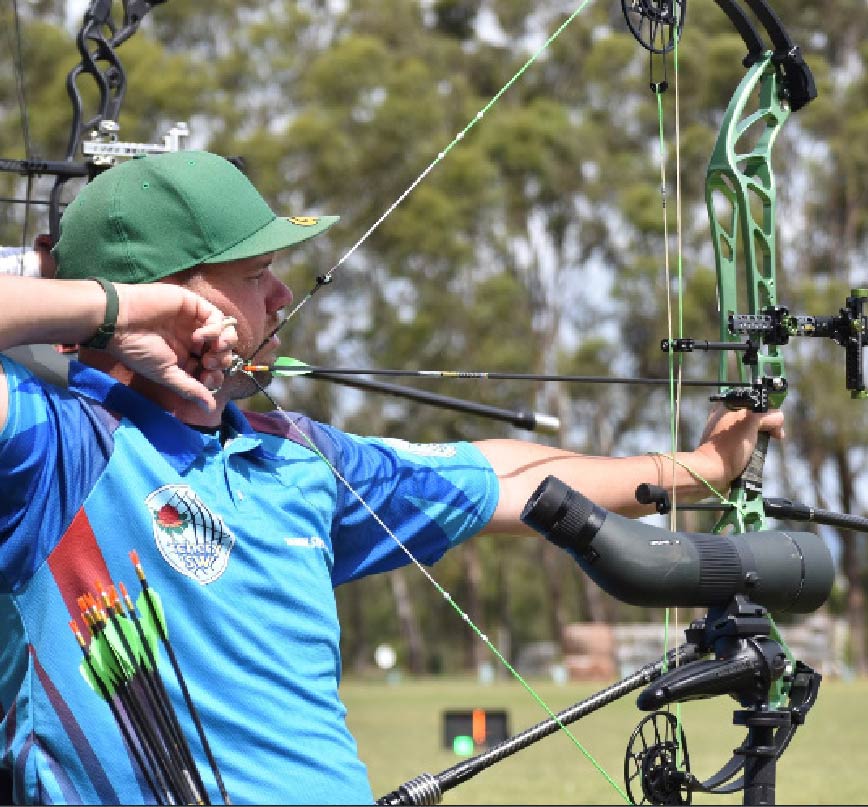 “Para-Archery got me out
hospital and back into life.”

“In hospital after the accident, I heard the doctor say to my parents and my wife I’ll probably never walk again.”

“Seven and a half years later I won a bronze medal at my first Paralympics in Rio.” – Jono

After a bodysurfing accident left him paralysed, Jono burst onto the archery scene and grabbed bronze at the 2016 Rio Paralympics – Australia’s first archery medal in 32 years.

Jono’s been unstoppable since, training almost every day to hone his natural skills and score two unofficial world records in his last two events.

“I got into archery as something to keep me busy and get me motivated rather than sitting inside. Now I’m on my way to breaking world records in Tokyo!”

One way your support will help is by giving athletes more time to train. Currently, Paralympic athletes in Australia usually work full-time and try to fit in their training after hours. This greatly limits their potential.

“We’re competing with people from other countries who have the funding to train full time. In Britain, my counterparts get paid 60,000 Euros a year to train.

But here in Australia a lot of us work and then shoot as well. So we don’t get to dedicate as much time as everyone else does.

I was shooting good scores, but couldn’t get past a certain level because I was working and trying to shoot at night. I needed to shoot more. I didn’t have the money to buy the equipment and do the travel. Since I got funding from Paralympics, my scores have improved dramatically.”

Paralympic Connect is our Secret Weapon 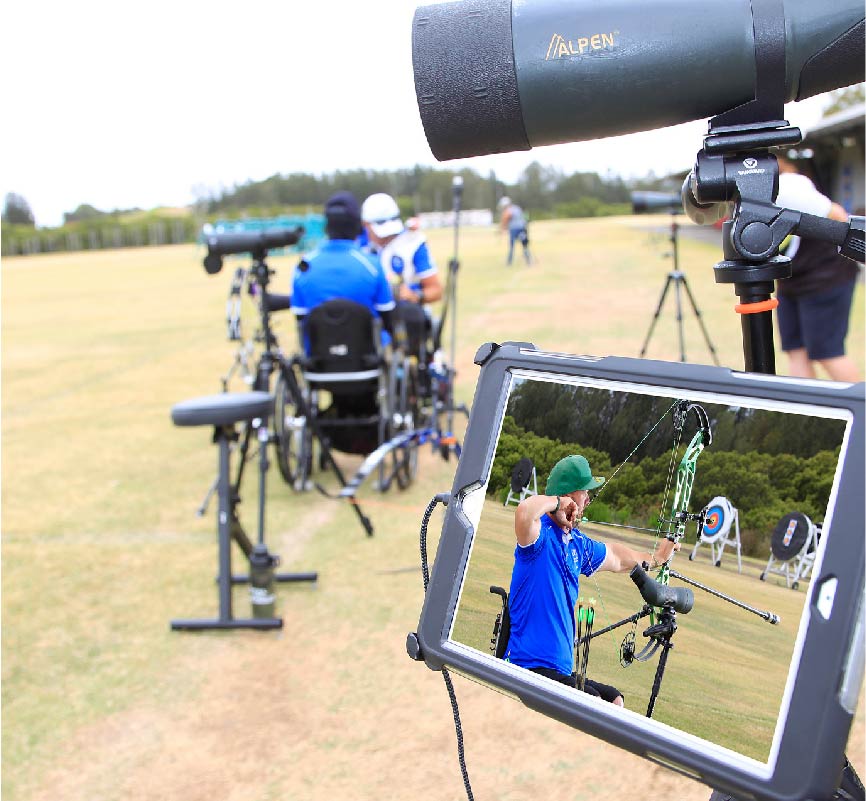 “It’s a brilliant way to give
Aussie Para-athletes a fair go.”

Paralympics Australia has an exciting new system to give our athletes the expert training they need, and with your support, more athletes will be able to access it in time for the Paralympic Games.

It’s called Paralympic Connect, and it’s a hi-tech virtual training platform. We need more funding for it to further evolve. It allows specialist coaches to train an athlete anywhere in Australia remotely. It will dramatically improve coaching, training and medal potential.

Connect solves a big problem faced by Australian athletes with disabilities: it’s very difficult for them to get access to the international level of coaching they need to compete.

They don’t get the same funding as able-bodied athletes, and it’s hugely expensive for them to travel for training.

With Paralympic Connect, athletes just need a laptop, tablet or smartphone, and they can get world-class training online from wherever they are.

Connect is currently being trialled by a small group of coaches and athletes, including Jonathon Milne, Rio, bronze medallist in Para-Archery and his coach Ricci Cheah. With your support, Connect has the potential to boost the performance of 25-40 athletes across a variety of Paralympic sports.

Plus, with further development, Connect could also link several experts around the country into the same online training session, to give an athlete the full coaching benefit.

Paralympic Connect will give us better coaches, athletes and performance when it counts.

How Paralympic Connect can help 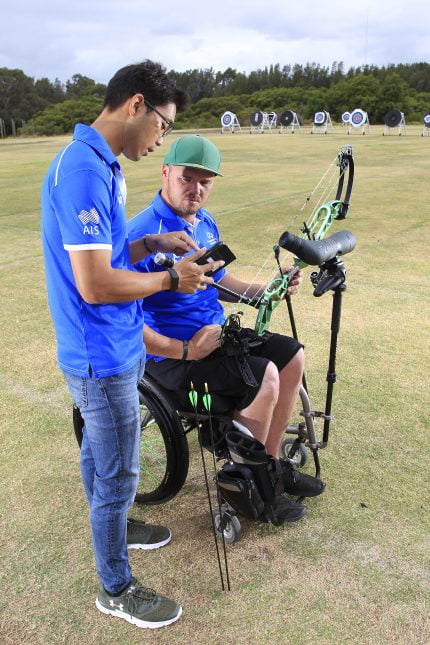 “This technology is the
future. With more funding
it could directly impact the
performance of around 40
athletes before Tokyo.”

Paralympic Connect is our secret weapon. It gives us quality training and coaching from anywhere, anytime.

Ricci Cheah, coach of the Australian Archery team, uses Connect to coach athletes in Tasmania, Western Australia, Victoria and NSW. He was able to keep coaching Jono even when he was recently overseas in Thailand.

At the moment, Connect doesn’t have the ability to record video coaching sessions. Ricci can’t play it back to the archers, so that they can see exactly what they are doing. When he is coaching athletes face to face, he often records them with high speed cameras so he can point out differences in the change of technique, or provide feedback.

With your support, we can get Connect to that next level.

As Jono says, “There are only millimetres standing between a bronze, silver or gold medal. Para-archers shoot 70 metres away from the target, which is only 12.2cm wide. And you win or lose by millimetres. Most of my matches are only won by a single point. You can’t lose focus. Connect can make all the difference between those millimetres”.

With 200 days to go your donation can go a long way!