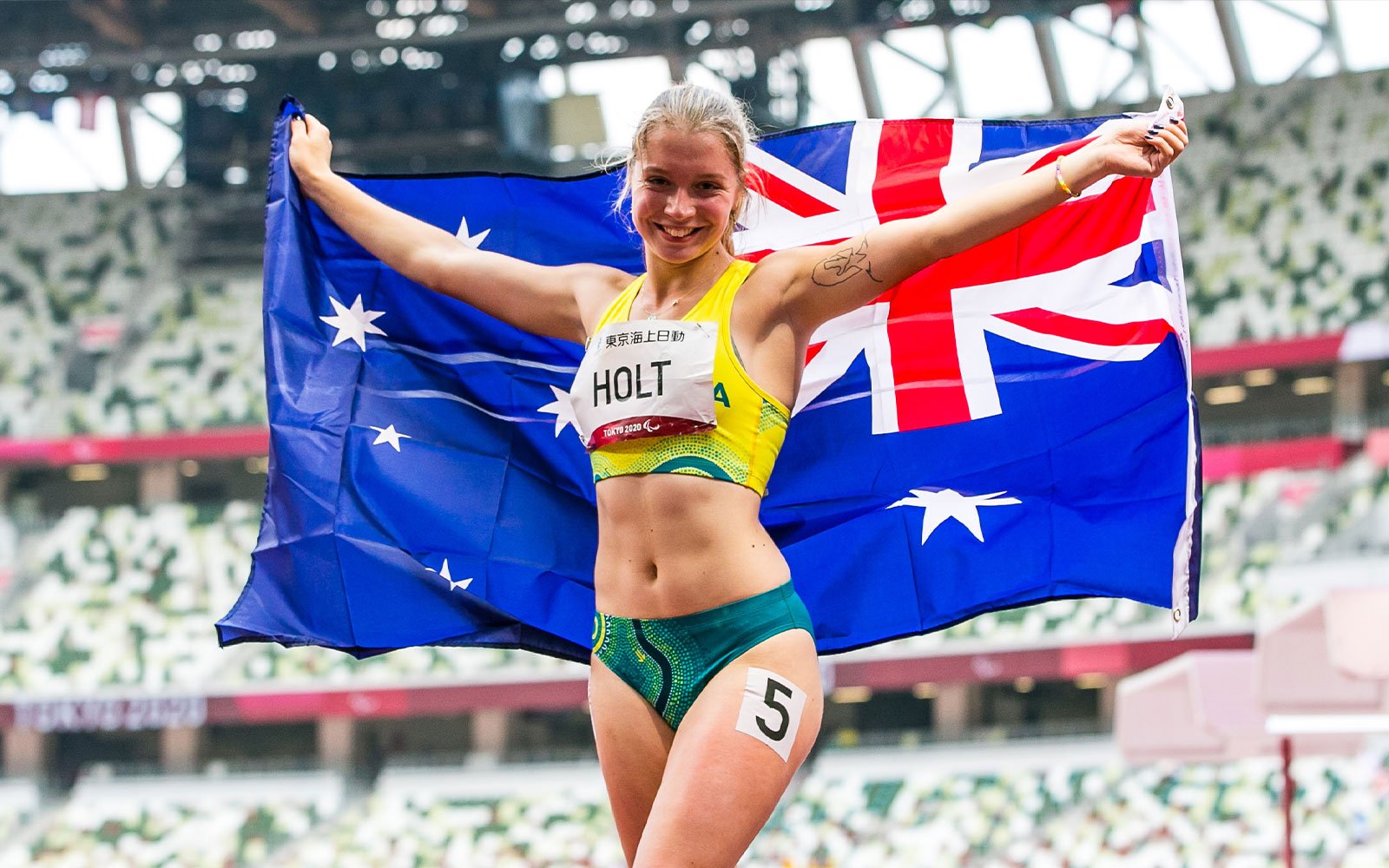 Paralympic sprinter Isis Holt has announced her retirement from athletics after a career in which she won five Paralympic medals, four world titles and Commonwealth Games gold.

The T35 sprinter, who broke nine world records, will pursue a career in psychology, a vocation deeply influenced by her time as an elite athlete.

“I’m really excited to explore what my career could look like out of sport. Psychology has always been something I’ve been fascinated by and that comes from the mental toughness and resilience that has a huge place in sport,” Holt, 21, said.

“Having been put onto high performance teams at the age of 14, I had to grow up quickly and learn those skills of being able to be resilient, go with the flow and essentially build my mental toolbox. When I was younger there was this internal struggle where I felt like I did such grown up things like race for Australia and then I would come back to school and my friends wouldn’t get it. That pushed me to work with my own psychologist to help find the balance and now I find myself loving the study of it.”

Holt began her career as a 12-year-old under the tutelage of Nick Wall and soon joined the world’s best, breaking the 200m T35 world record in Brisbane in 2015. At age 14, she shaved almost one second off that record at the 2015 World Para-athletics Championships in Doha and also broke the 100m world record to win the sprint double. Holt became Australia’s youngest individual event World Para-athletics champion.

She repeated the feat at the London 2017 World Para-athletics Championship.

Holt secured medals in three events at her Paralympic debut in Rio in 2016, winning silver in the 100m and 200m T35 and, together with Ella Pardy, Jodi Elkington-Jones and Erin Cleaver, won bronze in the 4x100m relay. At the 2018 Commonwealth Games trials, Holt lowered her 100m record again before claiming gold in front of a home crowd.

Holt, who has with cerebral palsy, took an 18-month break to finish high school before returning in 2020, working with Brisbane-based coach Paul Pearce. The gold eluded her at Tokyo 2020 but the Melbourne-native broke the previous 100m T35 world record with a blistering 13.13 second run, only to be beaten by China’s Zhou Xia who ran 13.00.

Holt says her life as an athlete has prepared her for her next stage of life.

“I didn’t grow up thinking I wanted to be a Paralympian, but I definitely felt I had very big shoes to fill when I found myself there, and it was a learning curve for me for the first few years,” she said.

“After a break I came back to the track with a different perspective. As much as I was chasing gold and the world records, I wanted to feel like I could run the best race I could run. I knew I wasn’t going to stop until I felt that and after my 100m in Tokyo, I realised I was at peace with what I had done. It was a starting point about reflection and what satisfaction meant to me.”

Holt thanked her support network, including coaches Wall and Pearce, and her parents who helped instil her with belief.

“I want to thank Nick Wall, my first ever coach. He was the person who told me that this world of Para-sport existed. He turned a 14-year-old, who hadn’t really run, into a world record holder and a first-time Paralympian at 15.

“I can’t thank Paul enough for how he supported me over the past two and a half years. He started coaching me via Zoom while I was still in Melbourne and it took trust and consistency from both of us. He is also the reason why I was able to do as well as I did in Tokyo and has helped give me confidence to make decisions as an athlete and a person.”

“Of course, my Mum and Dad who have been supportive in whatever I choose to do. Mum drove me to training, Dad moved with me to Brisbane when I decided to move and both did everything to help me be the best athlete I could be.”

Holt also thanked Athletics Australia and the Victorian Institute of Sport, Queensland Academy of Sport and her university, Queensland University of Technology.

“I had so much support from Athletics Australia. They gave me the flexibility to take a break when I needed to. Not enough people or organisations acknowledge the importance of allowing the chance for mental growth, but it was crucial to me,” Holt said.

“The VIS and the QAS both showed me a lot of patience around the work we did together, I am forever grateful. QUT have also been a huge support during my time in Brisbane. Being part of their Elite Athlete Scholarship was a huge help in supporting me to achieve the things I did as a student and as an athlete.”

Athletics Australia Chief Executive Peter Bromley said: “It’s been a privilege to watch Isis become one of the world’s greatest Paralympic sprinters and see her excel both personally and professionally.

“Since making her international debut … Isis has shown commitment and dedication to her craft. Her growth as an athlete has influenced many young sprinters to pursue their goals. I’d like to congratulate Isis on her achievements and wish her all the very best in her future endeavours.”

“Isis has been nothing short of remarkable to work with as both an athlete and a person. It’s been fantastic to see her rise and while we will feel her absence on our teams, we support her in her decision to finish with such satisfaction.

“On behalf of Athletics Australia’s High Performance department, I want to wish her the very best for her pursuit in psychology and we hope we see her back around the track one day, whether that’s in supporting our future talent or as an ambassador for the sport.”