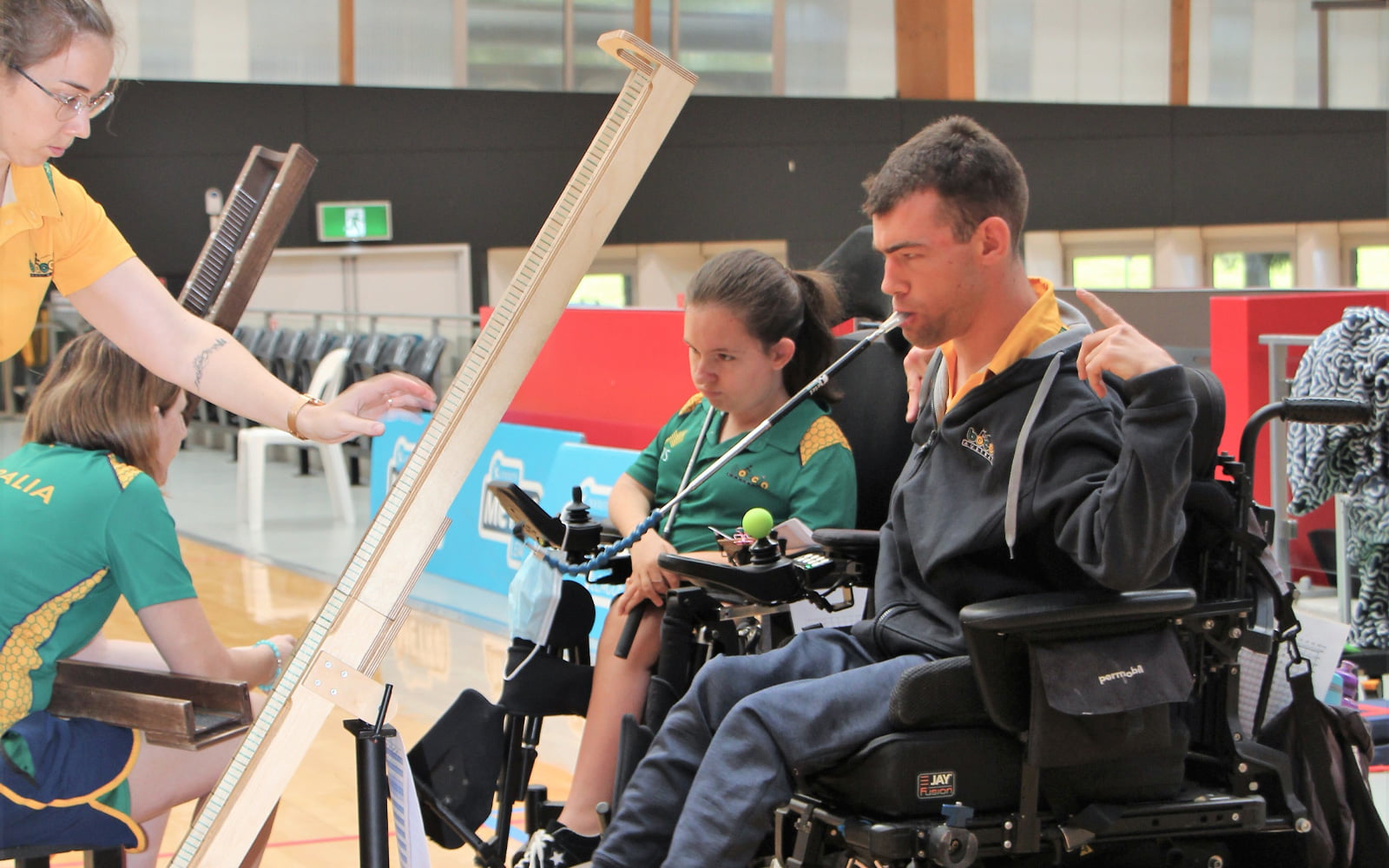 As if the past year hasn’t been tricky enough, Australian Team boccia player Jamieson Leeson has been balancing her Tokyo preparations with trying to finish high school – 350 kilometres from where she trains.

“It has been hard,” said Leeson, who attends Dunedoo Central School in the NSW Central West.

“I spent a lot of time at home last year, which was good for my HSC but not great for boccia. But I’ve definitely picked things up this year and I’m looking forward to going to Tokyo.”

Leeson was speaking between games at an Australian Team boccia camp at Sydney Olympic Park including her teammates, world No.4 Dan Michel and Leeson’s fellow Paralympic Games first-timer, Spencer Cotie. Among the camp’s aims was to simulate conditions the athletes will face at the Tokyo Games, which start on August 24.

“It’s been very different. Being from a small town, we don’t have a lot of Covid around. So it’s like switching between two lives, coming down to Sydney every second week and training with all the Covid rules and then going back home and living a normal life,” Leeson said.

“Being here at Netball Central, it’s really helpful having courts marked out and such a great support network around us.

“At home I don’t get a lot of training in, so it’s great to be able to come here and play on a court that’s pretty similar to what we’ll get in Tokyo.”

It beats training on a concrete surface as Leeson does in her school hall when she’s at home. Not that she’s complaining.

“I’m at a very small school of 200 from K to 12 and I’ve been the first from my school to do my HSC over two years. Splitting it up like that makes things a little easier. I do school every second week while I’m at home and then I come to Sydney every other week to train. The school’s been really good about it, really helpful.”

Cotie is another who’s had to be adaptable amid the changed circumstances. Though he said his training routine had been largely unaffected by the pandemic, the lack of competition had left some guesswork.

“It is fantastic to be able to compete against two really good international players,” said Cotie, who has had his eye on Tokyo since winning a silver medal with Michel in the mixed pairs BC3 at the World Boccia Championships England in 2018.

“Competing against them lets me know what areas of my game are going well and where I might need to practice more. And it’s pretty good to be able to compete in a simulated competition because I haven’t really done it for about 18 months. It has been really hard to not be able to compete and see where we are at. But I think we are doing everything possible to perform at the highest level.

“It’s our first Games [Leeson’s and Cotie’s] and we’re really looking forward to being able to compete and represent Australia at the Games.”