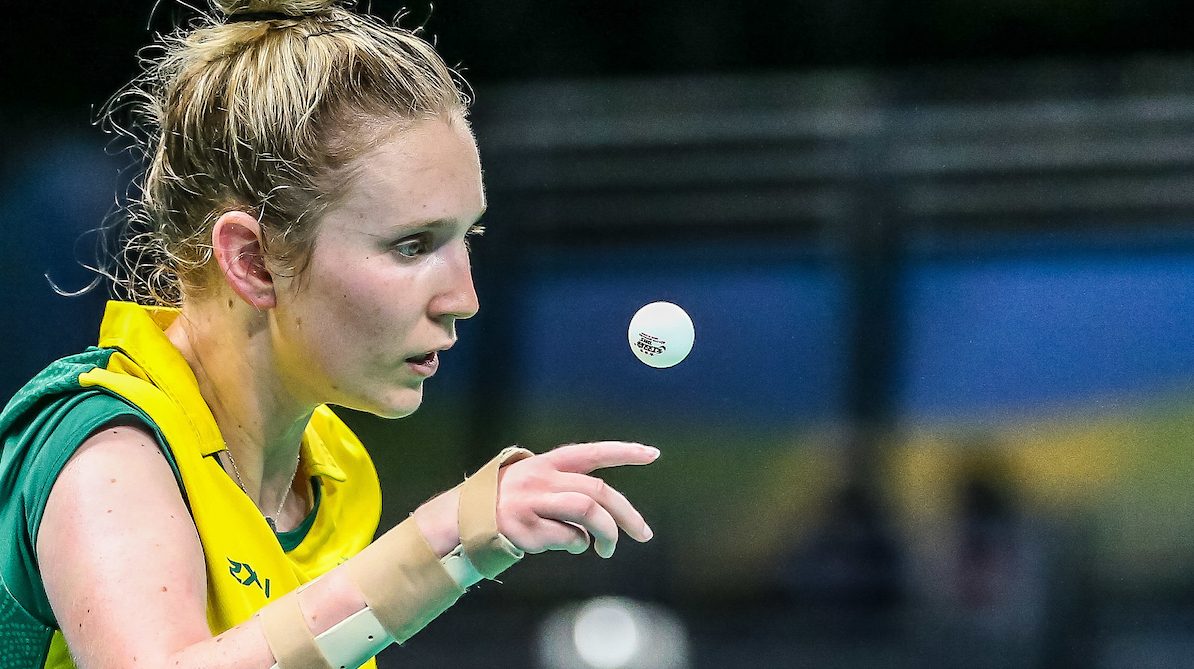 Australia’s first dual Paralympian and Olympian Melissa Tapper is primed and ready for a busy week as the table tennis star prepares to take on both the able-bodied and Para tournaments at the Gold Coast 2018 Commonwealth Games.

Set to compete in the class 10 individual event, in which she is a favourite to win gold, as well as the able-bodied individual, team and doubles in the women’s and mixed tournaments, Tapper believes her success at this Games will rely on her mental preparation and post-match recovery.

“It’s going to be a long week, but for me, I need to try and stay fresh and make sure that every time I step on the court, I play the best I can at that time,” the South Melbourne native said.

“Every match I play, I treat it the same as the one before. It doesn’t matter who it’s against – whether they’re younger, older, able-bodied or Para players. To me it’s all the same – it’s competition.”

“By taking that approach, I’m ready for every match, and it’s fantastic that Gold Coast 2018 is leading the way for inclusivity, so I can show that.”

Having prepared for an Olympics and Paralympics in one year, which she admits was a huge undertaking, she says it’s given her the ability to shift focus.

“I’ve had to go through similar situations with trials and so forth, with a lot of high quality matches that need to be played. In saying that, I’d prefer a busy schedule, otherwise I’d be twiddling my thumbs not doing much, so I’m really excited to get things going.”

In her main event, the Para-table tennis individual tournament, Tapper will face Australian teammate and Rio 2016 Team partner Andrea McDonnell as well as Commonwealth athletes she has never before come up against.

“Andrea’s come so far in a few years, she’ll be a tough competitor for me, but there’s also a girl from Nigeria who we haven’t seen play before. She’s had some great international results, and it’s difficult when you haven’t been able to see some of the players compete or play against them, but I’m ready to fight hard for every ball and ready to show some good Aussie fighting spirit, and the rest of it will take care of itself.”

While 28-year-old Tapper says she has no expectations on her results, citing she “doesn’t play for accolades, just for the love of table tennis,” another thing buoying her motivation is Australian able-bodied athletes and Para-athletes united as one team.

“I’ve had the opportunity and been quite lucky to spend time with able-bods and Paras, but now to be able to hang out with them together in one event, it’s so good,” she said.

“I passed one of my Para mates in the dining hall yesterday morning and she was saying how it was such a different experience for her being among able-bod athletes. It’s great that able-bods are getting more exposed to Para-athletes and vice versa.

“By the end of competition, everyone is going to be blended and respectful of every athlete and their abilities, whether they’re able-bod or Para, so I think it’s fantastic that it opens their eyes to other experiences, especially here at home on the Gold Coast.

“Inclusion in sport is such a big thing, so everyone coming together to unite and support one another and help each other get over the line for the best possible results, it’s going to be awesome.”

Tapper will begin her first event, the Women’s Team event on April 5.