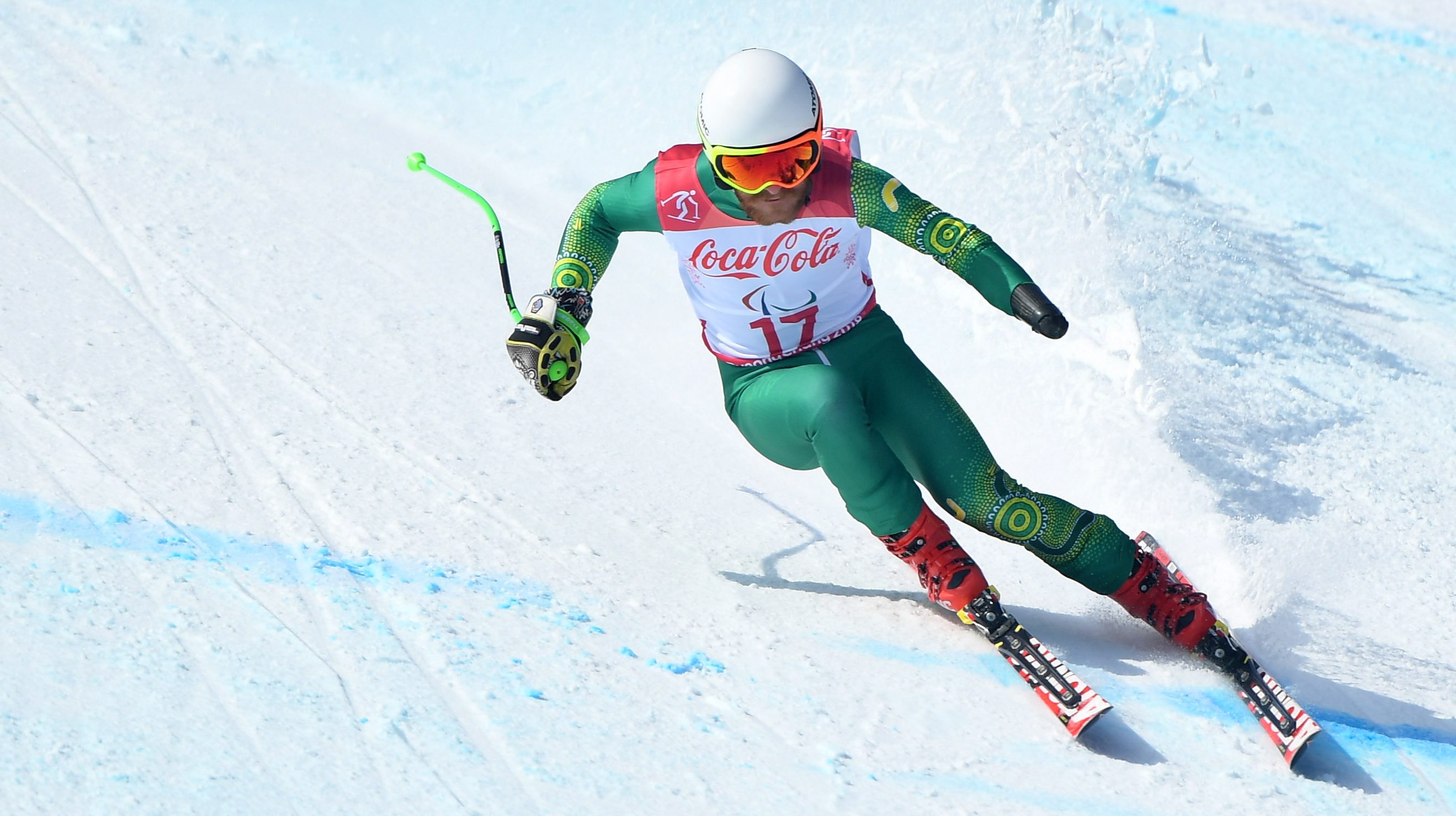 It certainly was a survival test at the Jeongseon Alpine Centre today as the Super G Para-alpine skiers experienced the warmest conditions yet at either the 2018 Winter Olympics or Paralympics, which made for poor quality snow.

The Spring-time weather created some havoc for the six Australian Paralympic skiers with only 50 per cent completing the run. Even the blue painted borders started to melt down the slope.

The day started at -3 degrees Celsius and by the time Australia’s Sam Tait competed in the sitting class, the mercury had climbed to 8 degrees. He was the last man on the list of 113 skiers to race the 2,040 metre Super G course in six men’s and women’s classes – 20 of them didn’t make it down.

Tait was one of them along with fellow sit-skier Tori Pendergast and standing class athlete Jonty O’Callaghan.

“The sun is making it softer and softer as time goes on,” said O’Callaghan.

“But everyone has to ski the course in front of them. Unfortunately I couldn’t do that today.

“I came down off the first roll and was in a pretty good position. But when I’d gone through the first pitch I hit a bump and fell inside, hit the ground and slid out.

“You could blame the conditions but at the end of the day everyone has them and I just couldn’t ski as well as I’d like to think I could.”

It was a similar story for Pendergast, who experienced the highs and lows of racing in 24 hours with a 4th in Saturday’s Downhill and a DNF for today’s Super G.

“The run was going well. I was confident I came off the roll in the right direction, I didn’t feel like I had to really jam it on anywhere.

“I tried to go for it as much as I could, especially with that course as there’s a lot of swing to it.  So you need to stay on it and stay strong on the edges.

“I came over the roll and then just hit a bump, which shot my ski out in a bit of different direction than I wanted to go.

“Unfortunately that just made me miss the gate.”

Tait could sympathise. He skied the race of his life yesterday to finish 11th in his first Downhill race at a Paralympic Games but felt the other end of a results sheet in the Super-G.

“I pushed out giving my all and just came round that double  and just didn’t have enough line and got super late into that next turn and couldn’t make the gate,” the 26-year-old said.

“You’ve just got to not really think about that (soft snow) too much. You’ve got your game plan, that’s just always the way you’re going to do it. Don’t overthink it, really.”

On the brighter notes for the day, Perrine kept her Downhill consistency in the Super-G with her second top-five finish in two days, alongside guide Christian Geiger.

Gourley finished inside the top-10 at the midway point of the 34-strong field but after the standing class finished, he had been bumped back to 12th spot. At one point in the race he was in top-five calculations. Still today’s result was an improvement on Sochi four years ago when he was a DNF in Super G.

“It was a bit wild from the very get go,” the three-time Paralympian said.

“I really nailed the tactic coming over that first roll, but unfortunately got bounced out a bit on that next right footer. I was kind of chasing my tail the rest of the way down.

“I didn’t quite execute on the bottom (of the run). Something to take heart out of was I was actually still right in there with three quarters of the way down.”

As for the deteriorating conditions, Gourley felt for all the competitors.

“It’s warm. It’s really warm. They’re doing the best they can and they did a good job by putting that little hold in between the men’s and women’s events, to allow the salt to work a bit better.

“But by now it’s really breaking up.”

Soyer was the one to flip his results completely within 24 hours. From a DNF in the Downhill, he successfully completed the Super G and suffered none of the equipment failures with his ski and bindings that plagued him in training and day one of competition.

“There are a few hard sections higher up but it is very soft and pretty much ‘whoopsies’ the whole way down,” he said.

But at least he has now completed his first Para-alpine medal event.

“I am pretty excited by that.  And my rig stayed in one piece so we’re kicking goals.”