Three gold and one silver for Australia’s sailing team 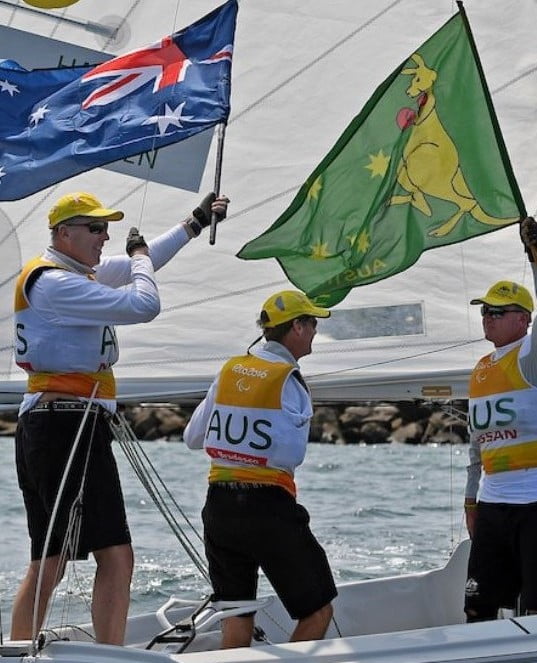 The Australian sailing team will leave the Paralympics in Rio with a remarkable haul of two gold medals and one silver medal after 2.4mR single-person keelboat sailor Matt Bugg stormed back from the disappointment of being disqualified in the second-last race of the regatta.

Bugg was in the gold medal position amid a torrid battle with defending Paralympic champion Helena Lucas of Great Britain and Damien Seguin of France. However, a protest by the Spanish crew after race 10 reversed a first-place finish into a disqualification and left Bugg seemingly hanging on for a bronze.

However, buoyed by the extraordinary success of teammates Dan Fitzgibbon and Liesl Tesch, who secured victory in the SKUD18 class after just nine races to historically defend their crown, and the Sonar crew of Jonathan Harris, Colin Harrison and Russell Boaden, who won their class with a race to spare, Bugg dominated the medal race to finish ahead of 14th placed Lucas to claim his first Paralympic medal.

It capped off a hugely successful regatta for the Australians, whose preparation, expertise and execution was world-beating throughout.

“I remember saying in a meeting we had about a year ago, ‘If we all work really hard in the next year and sail our best we could actually win three gold medals’,” Bugg said.

“We thought ‘Wouldn’t that be fantastic?’ but I don’t think anyone really thought it would happen. Unfortunately, it hasn’t happened. But we’ve gone very close and I don’t think you could really ask for more than that.”

Tesch and Fitzgibbon admitted to celebrating with a cheeky glass or two of wine after winning their title, but returned to “business as usual” for the final race day.

“… The absolute calm, review the race last night when we got home, up early this morning and I did my yoga and calmness in the sunrise and then came down as late as we possibly could,” Tesch said, indicating the methodical approach the crew took during the regatta.

Tesch – a veteran of seven Paralympic campaigns, originally in wheelchair basketball and the last two in sailing – is likely to have run her last race for Australia. Fitzgibbon certainly has, declaring his swansong a fairytale.

“To race on that racecourse, widely known as the most difficult one in the world, to have the scorecard that we got at the end of it, I think that’s a fairytale for us, a fairytale for me, for sure,” the 40-year-old said.

“We couldn’t have done any better. I can hang my boots up and be very proud of how we went and be very happy with everything that happened. We’re very lucky.”

The Sonar crew, close friends whose chemistry has flourished since they began racing together in 2013, said they had received “heaps of messages” from back home after ensuring their first Paralympic gold medal before the final day.

“We’ve had quite a few podium hits in the last two and a half years,” skipper Colin Harrison said. “But this is what it’s all about, the Games. So it’s great to really crack it for the most important event.”