Holt surges to silver in Rio 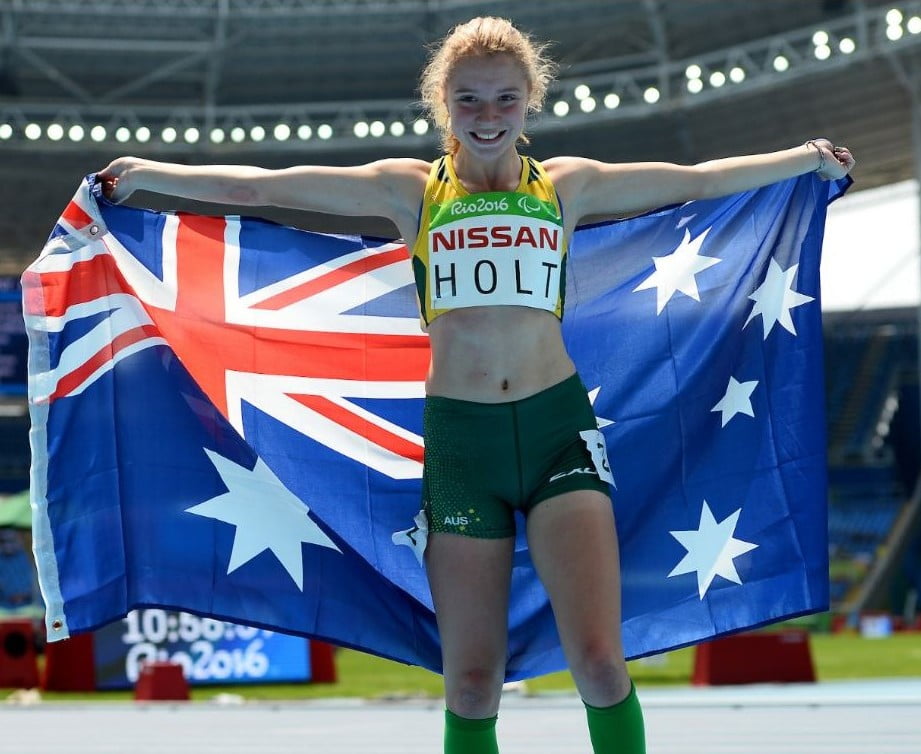 You could not wipe the smile off the face of Isis Holt after the bubbly Victorian high school student won a silver medal for Australia today in the women’s T35 100m final at Rio 2016.

From lane two, Holt gave it her all and crashed heavily to the track shortly after the finish line, only to spring straight back to her feet with a beaming smile knowing she would climb her first Paralympic podium.

Holt, 15, entered the race as the reigning World champion, but knew the Paralympic Games would be a massive step up. For that reason, she immediately dismissed any suggestion that she was feeling disappointment with her second placing.

“I didn’t expect to run that well and I’m very happy,” Holt said.

“The other competitors were all incredibly, incredibly fast and it’s great running against such strong competition. That’s what they came here to do and they definitely delivered.

“It reminds me that I can do anything. I hope that in the future I can come back and do it all again.”

Holt was also quick to praise the performance of the new Paralympic champion.

“She is an incredible athlete. I’ve never raced her before but she proved herself to be amazing and I think coming out here for the first time and achieving a result like that is unbelievable,” Holt said.

Holt’s silver medal was just one of the highlights on day seven of competition for the Australian athletics team at the Rio Olympic Stadium.

In the women’s T37 long jump, Jodi Elkington-Jones broke through for her first medal at a major championships when she won the bronze.

A veteran of two World Championships and the London 2012 Paralympic Games, a proud Elkington-Jones paid tribute to her family, her support staff and her home town of Wodonga after her third jump of 4.30m secured her place on the podium.

It capped a whirlwind week for the 23-year-old, who had been bedridden with illness in the Athletes’ Village over the weekend.

“It’s a dream come true, finally. All the hard work has paid off, not just over the past four years but over the last ten,” Elkington-Jones said.

“To finally say that I’m a Paralympic medallist, I’m ecstatic.

“I did get sick on Friday and I’ve in bed for the past couple of days. So to get out here and jump so well means I’m pretty proud of myself.”

“The final was up and down. I knew I was going into it in good shape, especially in the past couple of weeks, I’ve been hitting my marks,” she said.

“My coach and I pictured this for a couple of years ago. This was our goal and I’ve done it.”

“My parents and family are here which is special, but most of all this goes to my husband. He’s the one who’s been there every day I come home happy, come home sad – he’s the one who looks after me and supports me. Without him, I wouldn’t have been able to do this.”

Bundaberg’s Rheed McCracken was the other medallist today, winning bronze in the men’s T34 800m final.

Already with a silver medal to his credit in the 100m, McCracken was perfectly positioned at the bell and made his move with 250m to race. But Mohammed Alhammadi (UAE) met the challenge and stormed to victory in a Paralympic record time of 1:40.24, while world record holder Walid Ktila of Tunisia (1:40.31) also kept McCracken (1:41.25) at bay.

“The two boys ahead of me are outstanding. They deserve everything they get,” McCracken said.

“They went out really hard and I just tried to hang on as long as I could. I thought I could hear someone coming up behind me and I got bit nervous because my arms were burning, but I managed to hold on.

Isaac, renowned as a 100m and 200m sprinter, said this experience over the longest sprint distance will hold her in good stead for Tokyo 2020.

“I think I went out too hard too early. The adrenaline was pumping and I was probably overthinking things. But you live and you learn these things,” Isaac said.

In heats action, Madi de Rozario progressed to the women’s T54 5000m final from heat two, while Christie Dawes finished 11th overall and missed qualification after getting caught in the slower first heat.

But without doubt, the best performance from an Australian in the heats today came from Scott Reardon, who was ultra-impressive in the men’s T42 100m.

From lane four in heat two, Reardon set a new Paralympic record time of 12.26 to qualify fastest, and looked like he had plenty more to give in the final.

However, he will go head-to-head with Great Britain superstar Richard Whitehead and arch-nemesis Heinrich Popow from Germany, in what will be a blockbusting final tomorrow at 6:17pm Rio time.