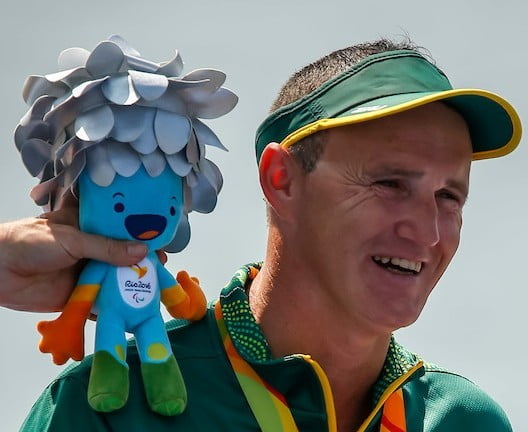 Erik Horrie is “over the moon” to have secured a second straight silver medal, in the AS men’s single sculls at the Rio Paralympics rowing regatta.

The 36-year-old was one of the pre-race favourites, having won the past three world championships.

But he couldn’t keep pace with Ukraine’s Roman Polianskyi, who steadily increased his lead throughout the 1000m race to finish three seconds ahead of the Australian, in a new Paralympic best time.

“Every athlete comes to a Paralympic Games chasing a gold medal,” Horrie reflected.

“But to come away with any medal, it’s unbelievable, especially with the talent of all the athletes I went up against today. It’s just a privilege to be able to be on that podium.”

The Sydneysider was especially buoyed by all the goodwill he’s received.

“I ended up turning my phone off last night just because of messages coming through wishing me luck from complete strangers back home,” he said.

“Thank you very much to everyone that’s been supporting me throughout the journey, especially my coach Jason Baker, he’s been beside me through the good and the bad. (It) takes a lot to put up with me.”

The crew embraced the experience, with Ingram turning to Murdoch after the race, saying “Kate, we’re Paralympians!”

“I didn’t quite know what to expect but it’s been amazing,” said Lefroy.

“It’s great to have family here, it was really uplifting coming down the end, I could actually hear the roar. It was really exciting and very powerful.”

And Ingram warned that they’re just getting started, “this crew’s literally been together 6 months, so imagine what we could do in four years.”

After the disappointment of missing the A-final in the TA mixed double sculls, three time world champions Kathryn Ross and Gavin Bellis took second spot behind Brazil in the B-final.

It was a bittersweet end to what’s been an incredibly challenging regatta for the duo, who admitted they didn’t know what went wrong.

“It’s an absolute privilege to be here with Gav and finish this journey with him as best as we could, it’s a really proud moment. We’ve dedicated our lives to rowing the last four years, we’ve sacrificed everything that we possibly could, family, friends, everything.”

“We weren’t good enough at this regatta and where it counted which is heartbreaking,” Bellis said.

“In the last four and a half years I’ve been away from my wife and kids for two years to give it everything I had, so this is as much for all our family and friends and supporters as it is for us. We couldn’t have done any more.”

Despite their obvious hurt, they were still incredibly gracious, heaping praise on the host nation.

“(I’ve) been around with them a long time, and it was nice to be in our last race on their home turf with them,” Bellis said.

“Brazil has put on an absolute spectacular event, they have done such an amazing job,” Ross added.

“I started 10 years ago against Josie (Brazil stroke Josiane Lima) and it is an absolute honour to be finishing it here with her in Brazil.”