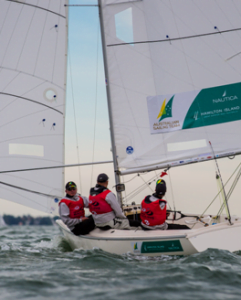 The silver medal adds to a string of successful regattas with the team having finished on the podium at every event since the London 2012 Paralympic Games and after winning World Championship silver and World Cup gold in December.

“It was a tough week with tight racing and close finishes, but to come away with a silver is a great result. With such close racing it’s great to stay up the front and on the podium,” Colin Harrison said.
The team posted a 2-2-3 series on the final day, which moved them up into the Silver spot. The Sonar was won by Canada with France following in third and World Champion Great Britain in fourth.

And looking ahead Colin added, “following on from Miami it’s important to keep to the front end of the fleet and just to keep looking for ways to improve ourselves, to get better on the race track and making smarter decisions.”

Paralympic racers have a relatively quiet period before it gets busy again in April and May with the Sailing World Cups Hyeres and Weymouth & Portland as well as the Para World Sailing Championships in Medemblik, the Netherlands.