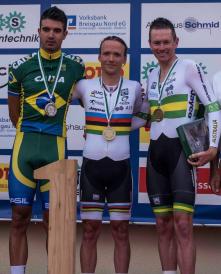 Australia’s Para-cycling road team will arrive in Switzerland today for the UCI Para-cycling Road World Championships full of confidence after a medal winning weekend at the third round of the World Cup Series in Germany.

Australia claimed eight gold medals at the World Cup which provides valuable final preparation for the World Championships which begin on 29 July in Switzerland.

Day two saw more medals for Australia with Miller taking her second gold in two days and Nickel grabbing silver in the men’s H1.  Simone Kennedy rounded out the podium with bronze in the women’s C3.

It was a successful third and final day for the team with five more gold to Carol Cooke – Women’s T2; Bianca Woolford – Women’s T1; Susan Powell – Women’s C4; and Alistair Donohoe – Men’s C5. Michael Gallagher made it two Aussies on the podium in the C5 behind teammate Donohoe.

Look ahead to World Championships…

The Championships will feature road races and time trials across a number of classifications – bicycles, tandems, tri-cycles and hand-cycles in men and women’s categories.