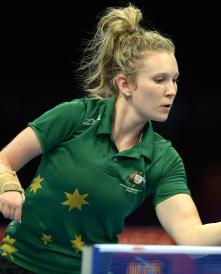 The unbeatable class 10 duo; Melissa Tapper and Andrea McDonnell took home gold after defeating the Taipei and Indonesian team 3-1. Andrea was unable to do a double defeat against Taipei’s Shiau Wen Tian going down 3-0. Melissa took the court and made short work of Indonesians Hana Resty winning 3-0 followed by another outstanding doubles victory with the Aussies combining their skills to shut out the combined team 3-0. The highlight match of the day which was not to be missed, the final singles battle with Tian and Tapper. Tian took the first game, Tapper hit back in the second game, at 8 all in the third game the game was in the balance when Tapper showed her strength hitting backhand winners to overpower Tien. Tapper then freed her game up to completely close out Tien in the fourth game giving her a 3-1 win and a 3-1 victory overall taking home gold.

Rebecca Julian was teamed with Thailand’s Sumalee Suangtho who took home 2 straight wins in the class 6-8 teams but couldn’t pull through for the gold medal play off with a 3-0 loss to the combined duo from Korea and Philippines.

Unfortunately the men weren’t as successful with the class 8 team; Barak Mizrachi and Connor Johnstone going down 3-0 to the Thailand number 1 team. An unfortunate loss but not an unfortunate effort, Johnstone showed great control, really lifting his game in the teams match and had an outstanding performance.