Pasterfield withdraws from IPC team for 2015 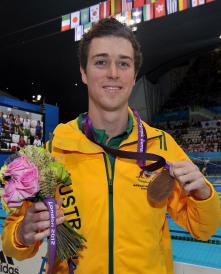 Dual Paralympian Andrew Pasterfield has made the decision to withdraw from the 2015 IPC World Championship team due to an ongoing elbow injury.

The 25-year-old who competed at both the Beijing and London Paralympic Games has his heart set on a third Paralympics and made the tough, but strategic decision to withdraw from the World Championships in Glasgow following advice from medical professionals.

As a Paralympic and World Championship gold medallist this decision did not come easy for Pasterfield, who will now take time out of the sport to rest and prepare for the Rio Paralympics in 2016.

“As well as my elbow injury I am also trying to overcome a long term ankle ligament strain and unfortunately, due to my injuries I am unable to continue to keep up with the increased demand at training as we got closer to the World Championships and as a result I have made the decision to withdraw from the IPC team for 2015,”Pasterfield said.

I will now re-focus and look ahead to make sure I am in peak condition come the Paralympic selection trials in 2016. It was a tough decision but ultimately I am looking forward to Rio and I wish the Dolphins all the best for the rest of this year.”

Swimming Australia Paralympic Performance Manager Adam Pine said it was important for Andrew to now dedicate his time and energy to recovering for the Paralympic Games next year.

“I have no doubt this is the best option for Andrew at this time, it will be disappointing not to have him on the team in Glasgow but we’re focussing on the positives and getting him fit and fast again for Rio in 2016,” Pine said.

The remainder of the team are on track with their preparations and will depart Australia on June 30 for the staging camp in Manchester and then on to Glasgow for the IPC World Championships starting 13 July.