Gold rush for Australia in Berlin 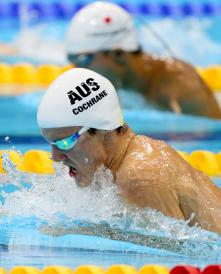 In two nights of remarkable swimming at the 2015 Berlin Open the Aussie’s picked up an additional 17 medals of which nine were gold taking the running medal haul to 23 medals in just three days.

Twenty-one-year-old Brenden Hall claimed three gold medals over the two nights; opening the gold rush in the 800m freestyle shattering his own S9 world record by more than seven seconds in 8:36.64, team mate Regan Wickens won the bronze with a 10-second personal best time of 11.10.84.

Following the speedy swim Hall lined up with team mates Michael Anderson, Timothy Disken and Matthew Levy for the 4x100m medley relay to back it up with another gold in 4:32.61.

In his London Paralympic gold medal event, Hall showed no mercy taking home his third gold medal in the 400m freestyle (S9) hitting the wall in 4:11.76.

In his second world record swim for the meet Blake Cochrane claimed back the SB7 50m breaststroke world record to win the gold in 35.52 narrowly ahead of team mate Levy (35.75) who finished ahead of Cochrane at this month’s Australian Swimming Championships.

Cochrane didn’t leave it there as he headed back to the pool for the 100m breaststroke where he set his third world record for the meet winning gold in 1:16.84. Cochrane lowered the times for the 50m, 100m and 200m breaststroke placing him in a strong position for the upcoming IPC World Championships in Glasgow.

Australia wasn’t done yet with world record swims with Jesse Aungles and Sean Russo both breaking world records for their classifications in the 200m backstroke. Aungles broke the S8 world record in 2:25.76 to win the gold medal in the event with Russo hitting the wall in 2:15.21 to break the S13 world record and win the bronze medal.

Adding to the gold medal wins was Ashleigh Cockburn, Madeleine Scott, Maddison Elliott and Lakeisha Patterson in the 4x100m medley relay with the team of four holding strong to finish in 5:05.09.

After a gruelling day in the pool swimming in three 100m backstroke races Anderson (S10) saved the fastest swim for the final claiming his second gold medal in 1:01.60 over Greek Paralympic champion Aristeidis Makrodimitris who took home the silver.

Patterson, Wickens, Scott and Kelly finished third in the 4x50m mixed freestyle relay, with Scott (36.80) backing it up with another bronze in the 50m breaststroke final also breaking an S9 Oceania Record.

With only one day of racing to go the 2015 Berlin Open team has clocked six world records, 19 personal best times, 36 season best swims and 23 medals.

The 2015 Berlin Open runs from Thursday 16 to Sunday 19 April providing beneficial race practice against strong competition ahead of the 2015 IPC World Swimming Championships in Glasgow.