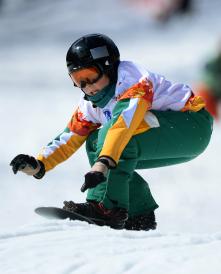 Australia’s teenage sensation Ben Tudhope has the banked slalom podium in his sights at the 2015 IPC Para-Snowboard World Championships in La Molina, Spain, on Saturday (28 February).

Despite finishing 10th in the men’s snowboard-cross SB-LL2 on Tuesday (24 February) Tudhope, who started snowboarding as an eight-year-old, is determined to come away from the Championships with a medal.

“I love the adrenalin rush of racing, and having the banked slalom on Saturday gives me a second opportunity to compete in the World Champs, so I am going to give it my all and hopefully do a bit better and finish on the podium,” 15-year-old Tudhope said.

“The World Champs have been great for me, the excitement around all of Spain has been wonderful. All the little children have been giving us high fives when they see us,” he continued.

Whilst fun is definitely still part of the youngster’s agenda, there is a serious side when it comes to competing.

Reflecting on what he felt was a disappointing performance on Tuesday, Tudhope said: “I guess the snowboard-cross didn’t go as planned. I got 10th which is OK for me, but I would have liked to have done better, but with the snow conditions it just wasn’t my day and luck wasn’t on my side.”

Tudhope, who has cerebral palsy which affects the function of his left side, feels this week has already made him a better rider.

“The World Champs have been awesome, I have definitely learnt a lot from them,” he said. “I think the courses are the next step up from our World Cup courses, and the progression of our sport is just getting better and better.”

Banked slalom is currently scheduled to take place on Saturday (28 February), depending on the weather conditions in La Molina, with 42 riders from 18 countries set to compete.