Nothing will stop McGrath from chasing his Rio dream 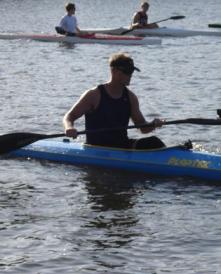 2014 was an amazing debut season for Curtis McGrath. He won gold in a record time in the V1 200 TA final at the ICF Paracanoe World Championships in Moscow.

He has had to overcome many challenges to achieve that feat, and yet he will have to achieve yet one more as he chases his Paralympic dream.

Earlier in the month when the International Paralympic Committee (IPC) announced the events that would be included in the 2016 Paralympic program, the V1 discipline missed out.

It came much to the disappointment of McGrath, the coaching staff and V1 paddling enthusiasts around the world.

But McGrath did not let his head drop, in fact he did the opposite and embraced the new challenge, describing it as just a “hiccup” in his quest to win gold in Rio.

“It is a whole lot different,” McGrath said.

“After two full weeks of hard training and lots of swims, I have made good progress in the kayak.”

On Friday, McGrath will race in a K1 boat for the first time at Grand Prix 2 (GP2) at the Sydney International Regatta Centre.

The event will double as selection for the national team this year.

It will provide McGrath with his first chance to gain some racing experience and see how far he will need to improve by if he wants to rival reining TA K1 200 champion Markus Swoboda, who won last year’s world title in 40.928.

Compared to his winning V1 200 time at Worlds, McGrath will need to improve by nearly five seconds to be in contention for a medal.

“This year my goal is to race around the 45 second benchmark and then improve further in the Paralympic year.”

McGrath will contest the K1 200 open-class final at 11:52am AEST on Friday morning.