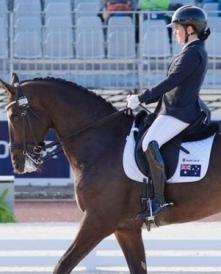 For International Para-equestrian rider Nicole Blanks the 2015 Boneo Classic will mark her first competition on Australian soil aboard her 12-year-old warmblood Vledder.

Prior to his arrival in Australia, Vledder was based in Holland and Blanks and her family would fly across the world two weeks ahead of an event to prepare with him.

Today, Blanks is grateful to have Vledder a mere paddock away.

“Now I have the chance to actually have a ride, have a feel and build a partnership with him, rather than just focusing on the competition,” explained Blanks.

In August last year Nicole and Vledder represented Australia at the World Equestrian Games with the pair placing 6th in the Individual Championships.

The transition from northern to southern hemisphere hasn’t all been smooth sailing. Two weeks into Vledder’s quarantine period Blanks was riding a young horse and had a fall which stopped her from getting back into the saddle for two and a half months. It was a trying time for Blanks. “He had finally come back and I couldn’t ride him,” she said.

Although the pair hasn’t had the preparation for Boneo as they hoped for, Blanks remains positive for the weekend ahead. “I want to go out and do my best for our first event at home, he is going really well, so if I was to get the scores I received in Europe I will be thrilled.”

The CPEDI Para-Equestrian competition begins Wednesday and runs through until Friday. The event marks the first opportunity for Australian riders to qualify for the Rio 2016 Paralympic Games. For riders to be eligible for selection they must have achieved one 60% score at an FEI Para-Equestrian 3* or above in an individual or team competition during the qualification period. Australia will also use the Boneo event to assist with qualifying a team for Rio and the Para-Equestrian Selection Panel has selected the following team:
•    Grade 1b Joann Formosa & Worldwide PB
•    Grade 2 Elizabeth Skinner & Freedom Spyda
•    Grade 4 Nicole & Blanks Vledder
•    Grade 4 Nikki Doogue & Al Pacino

Australia is required to post at least two team scores at qualifying events in order to gain an International Teams Ranking and will need to be the top ranked team in the Oceania region at the end of the qualification period to secure a team position at Rio.

Limited tickets are still available for the Boneo Classic (22nd – 25th January) and can be purchased here.

An extensive trade village will be operating throughout the four days along with a variety of different stallholders and family friendly activities, so there will be plenty to eat, see and do!

Photo with thanks to Equestrian Australia