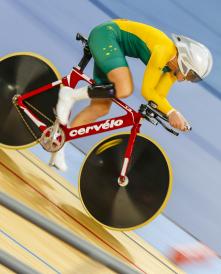 No less than three reigning Para-cycling track world champions will take to the boards in Melbourne this weekend at the Para-cycling Track National Championships.

2014 has been a tremendous year for Australian track cycling, with the nation finishing on the top the medal tally at the elite, juniors and Para-cycling world championships and the Commonwealth Games – which included Tandem sprint for the first time.

“We’ve got to go out there and do them [rainbow jerseys] justice,” said Formston.  “We’re coming up against Bryce Lindores (QLD) and Mark Jamieson (TAS) who are a pretty good paring so that will give us a good test of what we’ve got. As much as we like winning, we hate losing even more so we definitely won’t be handing anything over to these boys.”

The duo head into the event off the back of a successful New Zealand UCI Category One campaign where they collected valuable points to qualify for the 2016 Paralympics.

“In New Zealand we were able to pretty comfortably win the pursuit and we won the kilo as well so we were happy with that,” commented Formston.

“It’s been hard to stay in form for three weeks in a row but we haven’t really opened up full throttle yet, so we’ll see how we go this weekend.”

Three kilometre pursuit world and national champion Sue Powell (ACT) will go head-to-head with Alex Green (NSW) who last weekend in New Zealand was just 0.2 seconds behind her rival in the three-kilometre race against the clock.

“In Invercargill it was a very tight match up between myself and Alex in the pursuit,” said Powell, who edged her Australian team-mate for gold at the 2014 World Championships in Mexico earlier this year.

“I’m obviously hoping for a win, I’m undefeated here in Australia since I began so it would be nice to continue that, but like I said it’s really close.

“It’s always a proud moment to put on [the rainbow jersey] and race in front of your home crowd. I’ll certainly do my best to do it proud and race as best as I can.”

About the Championships
•    The Championships will be held at Darebin International Sports Centre Velodrome in Thornbury, Melbourne.
•    The Championships runs Thursday and Friday with two sessions of racing each day beginning at 10am and 5pm.
•    Entry is free entry to the day sessions, and range from $5 for evening sessions. Purchased at the gate upon entry to DISC velodrome. All tickets are general admission entry allowing access to both the front and back straight grandstands.