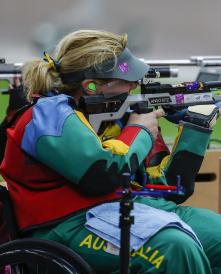 Nine shooters including Jason Maroney and living-legend Libby Kosmala have been named as part of the Shooting Australia 2014-15 Aiming4Gold (A4G) squad, hoping for selection for the Rio 2016 Paralympic Games.

In what has been an outstanding year of success for Australian shooting, the high performance teams from both able-bodied and para-sport shooting having eclipsed all benchmark medal targets in 2014. The new squad is a mix of world class athletes, who won two gold, four silver and three bronze medals in 2014, and those with genuine potential to be future medallists for Australia.

Leading the charge for the Rio 2016 Paralympic Games is Jason Maroney, Natalie Smith and Libby Kosmala.

Maroney, who trains using a range set-up on his own farm, won two IPC Shooting World Cup golds in 2014. If he makes the squad for Rio, it will be his third consecutive Paralympic Games.

Kosmala, 72, is a true legend of para-sport having won nine gold medals at Games since 1976. Rio would be her 12th appearance on the biggest stage possible.

Returning to the range after having a baby, London 2012 bronze medallist Smith has also made it onto the ‘performance’ list which is completed by Bradley Mark, Christopher Pitt and Ashley Adams.

Two athletes placed in Shooting Australia’s ‘talent’ pool on the A4G squad are rifle shooters Luke Cain and Anton Zapelli. From a sporty family, Cain injured his spinal cord during a game of Aussie Rules football in 1999 aged 19, and took up shooting to follow on from the skills he picked up hunting as a child.

“We have had a fantastic year in 2014 in terms of results and we have named a squad with the quality and potential to ensure we continue to be a force to be reckoned with on the world stage,” Marangon said.

“With just over a year-and-a-half to go to the Rio Olympics and Paralympics, we believe we have the athletes in this squad to produce great results for Australia.

“This squad reflects the need for us to be fiercely focused on winning medals at events that matter and making prudent investment decisions to maximise the likelihood of success.

“We are responsible for the high performance element of the sport of shooting, and it is the responsibility of our National Federations to recruit, retain and develop athletes to feed into Shooting Australia’s high performance programme. For this reason we continue to work extremely hard with our National Federations to ensure we create a pathway where success is inevitable.”

IPC Shooting recently announced the 2014 World Cup calendar which includes three Paralympic qualifiers in France, the USA and Australia, giving the A4G hopefuls the chance to compete on home soil in Sydney.