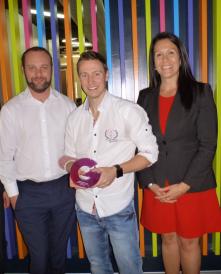 Social fundraising platform JustGiving has today announced media agency PHD Media as the recipient of the Company Fundraiser of the Year Award at the inaugural JustGiving Australia Awards for its efforts in raising much-needed funds for the Australian Paralympic Committee (APC).

PHD Media were nominated for the award by the APC for its participation in a Paralympic Corporate Challenge which saw the agency divided into four teams to compete in Paralympic sports such as wheelchair basketball and sitting volleyball.

While three sports were part of the challenge, the ultimate goal for each team was to raise as much money as possible through JustGiving.

Australia’s country director at JustGiving Nikki Kinlock said, “Here at JustGiving we are delighted that PHD Media has won the JustGiving Company Fundraiser of the Year for Australia in 2014. They have put an incredible amount of hard work in and are clearly committed to raising thousands of dollars for such a good cause as the Australian Paralympic Committee.

“We encourage all companies to do their bit in fundraising as it not only benefits a charity, but it also plays a huge part in increasing employee engagement and morale.”

With a goal for each team to raise as much money as possible, the challenge undertaken by PHD resulted in more than $6,500 raised through the social donation platform within just one week. Coupled with staff fundraising and the generous support of event sponsors, PHD Media raised a total of $12,000 for the APC.

“Fundraising initiatives like PHD’s Paralympic Challenge not only educate individuals on the role sport plays for people with a disability, but it helps create an understanding of diversity both in and out of the workplace,” said APC Fundraising Manager Rob Lawrenson.

“We saw more enthusiasm from the PHD staff than we have with other companies. The great thing about activity-based initiatives is that it also creates an appreciation for our athletes and the hard work and dedication that leads to their successes.”

Having not previously known that the APC is a not-for-profit organisation that needs support in order to send athletes to international competitions, PHD Australia chose the APC a charity to fundraise for.

“The APC Paralympic Challenge created a sense of excitement in our business, testing our staff’s comfort levels and helping to raise a phenomenal amount of money for the APC. It was an extremely fulfilling experience for everyone who participated and donated, and the ease of using JustGiving as a fundraising platform enabled us to quickly and easily collect donations and share our fundraising team pages globally,” Hack said.

“Our APC Paralympic Challenge was one of the most successful internal events we have ever hosted, and we are sure that our partnership with the APC will not end here.”

For more information on how your company can get involved in corporate fundraising or a Paralympic Corporate Challenge, please get in touch with APC Fundraising Manager, Rob Lawrenson.

A Golden Haul 12 Years In The Making

The World Record That Wasn’t

Turning A Let Down Into A Launch Pad