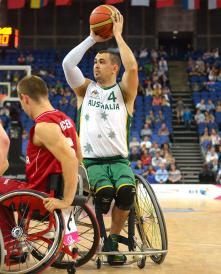 The Australian Rollers had to overcome a half-time deficit against Turkey to remain undefeated and record a 63-58 win at the 2014 IWBF World Wheelchair Basketball Championship in South Korea today.

In their toughest challenge of the tournament thus far, the Rollers were looking down the barrel of 28-24 deficit at the main interval as they struggled to find their offensive rhythm.

A brilliant 26-16 third period would prove the catalyst to elevating the team to victory, improving their record in South Korea to 5-0.

It was a match-winning performance from Rollers star Justin Eveson, posting a game-high 24 points to go with 10 rebounds and four assists – in his best showing of the tournament.

In was a basket-for-basket opening quarter as both teams looked to grab control, but it was the Turkish outfit who were first to put daylight between themselves as the Rollers, scoring 15-10 in the second quarter to lead by four points at the main break.

Eager to avoid their first defeat of the tournament, the Rollers rallied in the third term, turning the deficit into a six-point lead heading into a decisive final period.

For all the latest information on the Rollers quest for back-to-back IWBF World Wheelchair Basketball Championship be sure to visit the BA website at basketball.net.au