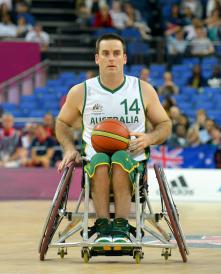 The Australian Rollers have produced a dominant performance to crush Germany 62-38 in their group stage game at the 2014 IWBF World Wheelchair Basketball Championship in South Korea yesterday.

Coming off a hard-fought opening win of the tournament against Sweden, the Rollers produced a second-half clinic, outscoring their opponents 34-14 on their way to a 24-point victory.

Shaun Norris finished with a game-high 16 points to go with four rebounds and four assists, while Nick Taylor had 12 points and Brad Ness had 10 points and six rebounds.

In a showing that has the Rollers the talk of the tournament, a closely fought opening quarter led to a completely one-sided contest as the defending champions flexed their muscle.

After quarter time the Germans could only muster 22 points for the remaining three quarters as the Rollers turned a 28-24 half time lead into a game-winning 42-32 advantage heading into the final period.

The last quarter was another statement from the Rollers, playing out the whole 40 minutes and holding the Germans to just six points.

For all the latest information on the Rollers quest for back-to-back IWBF World Wheelchair Basketball Championship be sure to visit the BA website at basketball.net.au