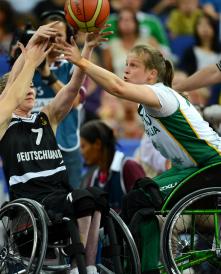 You can almost cut the excitement with a knife around the Australian Gliders camp just days out from the 2014 IWBF Women’s World Wheelchair Basketball Championships in Toronto, Canada.

Expectation is high among the group, who are coming into the tournament looking to end a 12-year World Championship medal drought dating back to 2002.

This expectation is seen more as a motivating factor for the experienced team Gliders Head Coach Tom Kyle has selected, with his players eager to prove a point when they touch down in Toronto later this week.

“When the team came together in Wollongong last month for games against NWBL teams, the excitement was tangible then,” Kyle said.

“The girls were jumping out of their skin and they can’t wait to hit the court in Toronto. We do all these training camps and play games around the world, but it’s really all about the competition for our team. That’s what we love and that’s what defines us.”

Having claimed silver at the London 2012 Paralympic Games, the Gliders are now set to use this performance as a launching pad to reclaiming their place among the world’s elite, according to Kyle.

“We spoke as a team last year, outlining what we want to achieve,” Kyle said.

“We want to be the world’s best and beyond that we want to set a new standard for the Gliders going forward.

“It’s not just about getting a medal at these World Championships, it’s about setting the standard for the tournaments beyond and creating a dynasty for Australian women’s wheelchair basketball.

“This is something the group have wanted for a long time and after the efforts in London, they know they are capable of taking the contest up to the world’s best.”

The Gliders opening game of the 2014 IWBF Women’s World Wheelchair Basketball Championships against the USA.

The 2014 IWBF Women’s World Wheelchair Basketball Championships will be held in Toronto, Canada from 20-28 June.

For the latest information on the 2014 IWBF Women’s World Wheelchair Basketball Championships visit the official tournament website at http://2014wheelchairbasketball.com/.