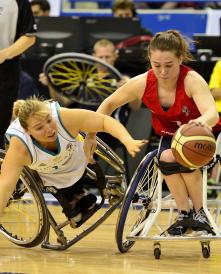 The Australian Gliders have ended their 2014 IWBF Women’s World Wheelchair Basketball Championships campaign after a 77-70 overtime loss to Great Britain, finishing the tournament in sixth place.

It was again a master class from Gliders star Amber Merritt, who finished the game with her third 25-plus point outing of the tournament, posting a game-high 32 points on a remarkable 16-of-20 shooting from the field.

The 21-year-old Western Australian was the standout for the Gliders, adding seven rebounds to her 32-point haul to finish the tournament as the team’s leading scorer at more than 15 points per game.

Merritt found support in Cobi Crispin (six points, eight rebounds and four assists), Clare Nott (10 points) and Leanna Del Toso (eight points and seven assists).
Coming off a hard-fought win over China to secure a berth in the fifth/sixth playoff, the Gliders and British went toe-to-toe in four brilliant quarters of wheelchair basketball, with nothing able to separate them at the end of 40 minutes.

This meant the Gliders would go into overtime for the first occasion in the tournament, with the British able to find another gear to win the extra period 13-6 and the game 77-70.

For the latest information on the 2014 IWBF Women’s World Wheelchair Basketball Championships visit the official tournament website at 2014wheelchairbasketball.com