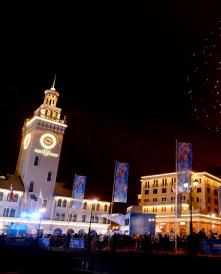 Two Australians have played central roles in the Sochi Winter Paralympic Closing Ceremony at the Fisht Stadium over night.

The youngest athlete of the 550 from 45 countries who competed in Russia from March 7-16, Australian snowboarder Ben Tudhope, 14, became his country’s youngest flag bearer at a Summer or Winter Games.

He was dwarfed by Austria’s flag bearer and skiing double gold medallist at Rosa Khutor this week, Markus Salcher, 22, who was grouped alongside Tudhope as the representatives from each team entered the arena in groups of four.

Further into the ceremony, which featured wheelchair dancers, double-leg amputee break-dancers, dancing Cossacks and even Spanish tenor Jose Carreras, Australian bronze medallist Toby Kane was one of two athletes – one male, one female – awarded the prestigious Whang Youn Dai Achievement Award. Kane and snowboarder Bibian Mentel-Spee (Netherlands) were given medals and flowers, while cheered by the 40,000 spectators.

The awards have been presented at the past 11 Paralympic Games (Summer and Winter) stretching back to Seoul in 1988, and recognise athletes who not only succeed on the sporting field, but also inspire team mates and the community off it.

Once the formalities were over and the IPC flag was lowered, the South Korean flag was raised alongside Russia’s, signalling the next Winter Games hosts (2018 Pyeongchang).

“We delivered on our promise,” Sochi 2014 President and Chief Executive Dmitry Chernyshenko said.

“The Games helped spread the Paralympic values across the country, and that is the greatest outcome of the Games.”

“The Games have been absolutely mind blowing in terms of their impact, far beyond what the Paralympic Movement expected when coming here. They have been a spectacular showcase of sport and the power of the human spirit,’’ Sir Philip said.

“Not only have the athletic performances been first class, but so has the organisation which has been seamless.’’

Russian athletes could also pat themselves on the back. They topped the Olympic medal table with 13 gold, and did the same at the Paralympics with 30 gold.

The venues from the Sochi Olympics (February 3-23) and the Paralympics (March 7-16) will continue to have `life’ on the international sporting stage. Russia is hosting the 2015 European Luge Championships, the 2016 Ice Hockey World Championships; the 2017 Bobsleigh and Skeleton World Titles and the 2018 FIFA World Cup.